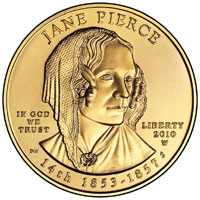 Earlier today, the United States Mint increased the prices for all available numismatic gold products. The adjustment comes as the price of gold reached a fresh all time high above $1,270 per ounce during trading yesterday.

Since early 2009, the US Mint has followed a policy which allows the adjustment of gold and platinum numismatic product prices as frequently as once per week in response to changes in the price of the metals. The average price of gold and platinum are determined each week based on the London Fix prices from the previous Thursday AM to the current Wednesday AM. If the calculated average falls into a different pricing tier (established at $50 increments for gold and $100 increments for platinum), then a pricing adjustment is made, provided the Wednesday PM price agrees directionally.

The average price of gold for the most recent period moved into the $1,250 to $1,299.99 pricing tier, prompting a price increase.

The First Spouse Gold Coins available for Margaret Taylor, Abigail Fillmore, Jane Pierce, and James Buchanan’s Liberty had prices increased from $779 to $804 for proof coins and from $766 to $791 for uncirculated coins. Each of these coins contains one half ounce of gold.  The 2010 Proof Gold Buffalo, which contains a full ounce of gold, had its price increased from $1,510 to $1,560.

Currently, there are no numismatic platinum offerings available form the US Mint. The 2010 Proof Platinum Eagle sold out on August 19, 2010 after roughly one week of sales.

Around mid October, the United States Mint is expected to release 2010 Proof Gold Eagles. These collectible coins had been canceled in the previous year, as the Mint struggled to meet demand for bullion coins. Based on the current price of gold, the 4 Coin Set containing 1.85 ounces of gold would carry a price tag of $2,845.50.