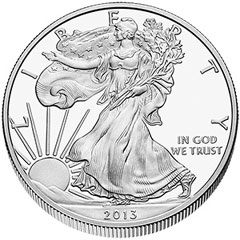 Precious metals are currently showing declines from year ago levels, yet the United States Mint has recently implemented a series price increases for gold, silver, and platinum numismatic products.

Collectors who may have been hoping to pick up lower priced numismatic coins following the pull back in precious metals will no doubt be dismayed by this unusual situation.

Effective today, the US Mint has adopted revised pricing grids for gold and platinum numismatic products. These products are priced under a flexible policy which results in adjustments as frequently as weekly based on the average market prices of the metals. The newly adopted grids reflect increases in the premium component for numismatic gold coins of as much as $80 for the Proof Gold Buffalo. The premium component for the Proof Platinum Eagle was increased by $108.

During the United States Mint’s most recently completed fiscal year, numismatic program revenue had fallen by 33.32%. Much of the  decline could be attributed to lower sales for gold and platinum proof coins, which were down by 56.34% compared to the prior year. Despite the sales decline, the segment had remained steadily profitable with net margin of 12.01%.

For the same fiscal year, silver product revenue had shown an increase of 16.49%. Net margin for this segment was rather robust at 32.69%. Silver product segment had generated more net income than any other numismatic segment.

According to the United States Mint, a main objective of the numismatic program is to increase their customer base and foster sales while controlling costs and keeping prices as low as practicable.