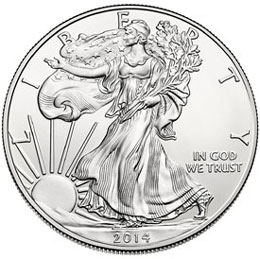 The pace of sales for the United States Mint’s bullion coins remained subdued for the month of August 2014. Across the primary gold, silver, and platinum bullion coin programs, sales remained near their lowest monthly levels of the year.

American Silver Eagle bullion coin sales measured 2,007,500 ounces for the month. This amount was up only slight from the prior month when sales had dipped to 1,975,000, marking the lowest monthly sales level of the year. The amount is down significantly compared to the year ago period when sales had reached 3,625,000 ounces.

The recent slowness is a change from earlier in the year when heavy demand resulted in the Mint imposing their allocation program which had rationed the available supply of coins amongst authorized purchasers. The allocation program was lifted effective June 2, 2014.

Sales of the American Gold Eagle bullion coins measured 25,000 ounces for the month. The sales were concentrated in the one ounce sized coins, with small contributions from the quarter ounce and tenth ounce sizes. The monthly total ranks as the second lowest of the year, behind March when sales were 21,000 ounces.

Despite the low level, the latest monthly sales are up from the year ago period when sales had dipped to a six year low of only 11,500 ounces. The unusually low sales had been caused by an increase in secondary market supply which reduced the need for newly minted coins.

For the year to date, Gold Eagle sales have reached 321,000 ounces. This is less than half of the sales of 691,000 ounces achieved during the comparable year ago period.

American Platinum Eagle bullion coins recorded sales of 700 ounces for the month. This is up from the zero sales in the prior month and brings year to date sales to 13,600. This year, the US Mint resumed sales of the platinum bullion coins after more than a five year lapse.

Sales of the 24 karat American Gold Buffalo coins reached 8,000 ounces during September. This represented the second lowest monthly sales level of the year behind July when sales were 5,500 ounces. For the year to date, sales have reached 125,000.