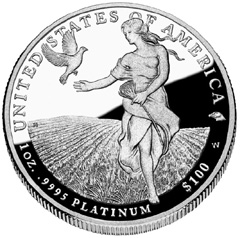 Effective earlier today, the United States Mint reduced the price it is charging for the 2011 Proof American Platinum Eagle. This product is covered under a flexible pricing policy which allows changes to be implemented as often as weekly. This was the first price update since the launch of the product.

The 2011 Proof Platinum Eagle went on sale May 26, 2011. The coin represented the third release in an ongoing series highlighting the core concepts of American democracy as found in the Preamble to the United States Constitution. This year’s design featuring a harvest goddess and a landing dove is representative of the theme “To Insure Domestic Tranquility”.