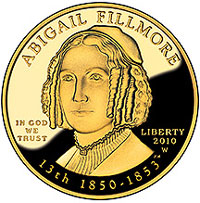 The United States Mint has announced a reduction in the maximum mintage limits for this year’s First Spouse Gold Coins. The 2010 issues featuring Abigail Fillmore, Jane Pierce, James Buchanan’s Liberty, and Mary Todd Lincoln will all have limits set below the levels of the prior coins of the series.

The first coins of the series featuring Martha Washington and Abigail Adams had been released on June 19, 2007. The maximum mintages were set at 40,000 for each coin, across both proof and uncirculated options. Despite an ordering limit of five coins per option per household, the coins sold the entire maximum mintage on the first day of sales.

The following issue featuring Thomas Jefferson’s Liberty also sold the maximum mintage of 40,000 on the first day of sales, even with a reduced ordering limit of just one per option per household.

The one day sell outs proved to be an anomaly, as later issues of the series did not fare as well. The fourth coin featuring Dolley Madison sold a combined 30,896 coins over the course of approximately one year of sales. The four coins issued during 2008 had combined final sales ranging from 11,677 to 12,560.

In general, First Spouse Gold Coins remain available for sale at the United States Mint for approximately one year or until the maximum mintage has been sold, whichever occurs first.