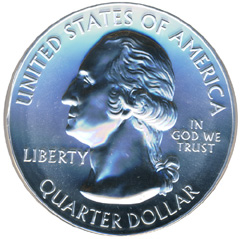 The United States Mint has continued to sell 2011-dated America the Beautiful Five Ounce Silver Bullion Coins to its network of authorized purchasers into the 2012 calendar year. While it is typical for the Mint to sell prior year dated bullion coins into the following year for other series, the authorizing legislation for the five ounce silver coins seemed to disallow it.

Public Law 110-456 authorized the America the Beautiful Quarters Program, which will feature a series of rotating reverse designs on the quarter dollar representing a national park or site in each state, territory, and the District of Columbia. The same law also provides for the issuance of five ounce .999 fine silver bullion coins featuring duplicate designs of the quarters. The law indicates that these bullion coins will be issued in quantities that the Secretary of the Treasury determines are appropriate.

With regards to the period of availability, the law states:

Bullion coins minted under paragraph (1)—
‘‘(A) shall become available for sale no sooner than the first day of the calendar year in which the circulating quarter dollar of which such bullion coin is a duplicate is issued; and
‘‘(B) may only be available for sale during the year in which such circulating quarter dollar is issued.

Michael White of the United States Mint Office of Public Affairs provided this statement from the legal department:

Even if this is a valid interpretation, it is arguable that this was not truly the intention of the authorizing legislation. The United States Mint generally does have the authority to issue coins across multiple years, unless there is a specific requirement otherwise. The 2010-dated America the Beautiful Quarters have actually continued to be issued into 2012 within various numismatic products sold to collectors. The “issuance” of coins in this fashion can continue for many years into the future, making the sales limitation on bullion coins, as the US Mint is interpreting it, essentially meaningless.

The sales limitation specified under the law did not come into play for the release of the 2010-dated America the Beautiful Silver Bullion Coins. The US Mint was only able to produce 33,000 coins for each of the five designs, which were all made available to authorized purchasers in early December 2010. All 165,000 of the coins were sold to authorized purchasers by December 23, 2010.

The US Mint has confirmed plans to offer both bullion and numismatic versions of the 2012 America the Beautiful Five Ounce Silver Coins in reduced quantities. Information on the releases dates is not yet known.