Commemorative coin programs are authorized by acts Congress to honor people, places or events important to the country. In general, only two programs may be approved for each year, although multiple coins can be included as part of each program. Prices for commemoratives include surcharges which are payable to organizations or projects specified within the authorizing legislation. 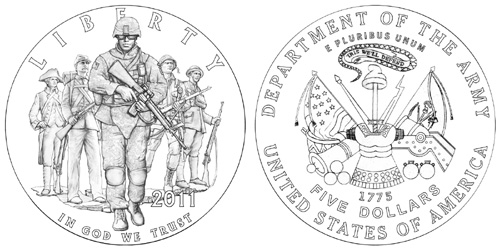 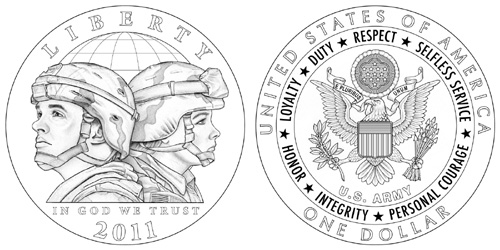 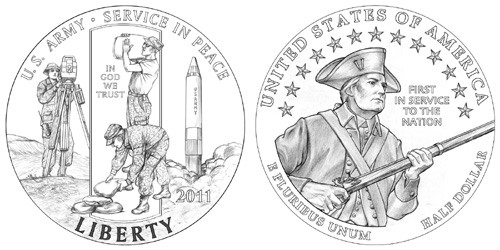 The 2011 U.S. Army Commemorative Coins are scheduled to be released on January 31, 2011. Under the typical procedures, sales should continue until the maximum authorized mintage for any coin has been sold, or a subsequently announced ending date in December. The maximum mintages are 100,000 for the $5 gold coin, 500,000 for the silver dollar, and 750,00 for the clad half dollar.

The design of the gold coin represents the Army’s war service with depictions of Continental, Civil War, World War I, World War II, and modern era soldiers. The official U.S. Army emblem appears on the reverse. The silver dollar’s design is intended to symbolize the worldwide deployment of the 21st century U.S. Army. On the obverse are the busts of male and female soldiers with a globe in the background, and on the reverse is the Great Seal of the United States with the seven core values of the Army. The half dollar represents the Army’s service during Peacetime on the obverse, with a Continental solider with musket on the reverse to symbolize the Army as the first military service to defend the country. 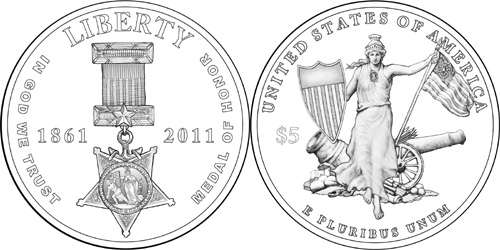 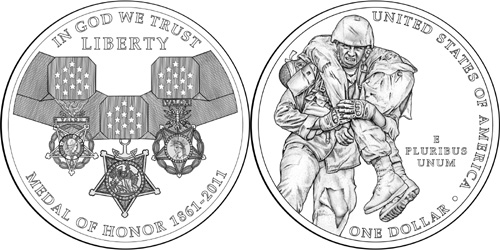 The $5 gold coin shows the original Medal of Honor that was authorized by Congress in 1861 on the obverse. The reverse of the coin features Minerva, the goddess who appears on the central image of the original Medal of Honor. She holds a shield and Union flag, with artillery and munitions behind her. The silver dollar depicts the current Medals of Honor for the Army, Navy, and Air Force. On the reverse is a scene of an Army infantry soldier carrying a wounded comrade to safety under enemy fire.

Pricing for the 2011 Commemorative Coins has already been established by the United States Mint. Initially, the coins will be available under reduced introductory pricing. After an initial sales period, regular pricing goes into effect and remains in place until the conclusion of sales. Surcharges included within the product price are $35 for the gold coins, $10 for silver coins, and $5 for the half dollars. These surcharges will be distributed to the Army Historical Foundation to help finance the National Museum of the United States Army, and the Congressional Medal of Honor Foundation to help finance educational, scholarship, and outreach programs.