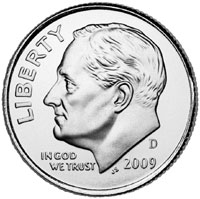 The United States Mint is responsible for producing and issuing circulating coins in amounts necessary to meet the needs of the United States. The coins are shipped to Federal Reserve Banks to replenish inventory and fulfill commercial demand. Revenue is recognized based on the face value of the coins as they are shipped. Seigniorage arises from the difference between the face value of the coins and the gross cost to produce and distribute the coins.

Shipments to the federal reserve fell from nearly 10 billion coins shipped in the prior year to 5.2 billion coins for fiscal year 2010, representing a decline of 48%.

The heaviest declines in shipments occurred for the five cent, ten cent, and twenty five cent denominations, which each fell by more than 60%. Shipments of one cent coins fell by 38.96%. The Annual Report attributed the smaller decline to the popularity of the rotating designs issued for the 2009 Lincoln Cents, although the rotating designs for the twenty five cent denomination under the District of Columbia and United States Territories Quarters Program failed to yield similar benefits.

Seigniorage declined by39.42% to $427.8 million, representing the lowest total seigniorage in 12 years. Seigniorage margins were supported by declines in the prices of base metals and the higher proportion of dollar coins within total shipments, which helped offset production costs which were spread over fewer units.

The cost of producing each denomination except for the five cent coin rose compared to the prior fiscal year. The individual cost of producing the one cent and five cent coins once again exceeded their face value. It cost 1.62 cents to produce each penny and 6.03 cents to produce each nickel.  The amount of seigniorage lost through the production of the cent was $19.8 million with an additional $2.2 million lost on the nickel.