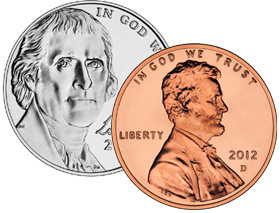 While Canada recently made headlines with their decision to eliminate their “penny” or one cent coin, the United States has increased production for their smallest denomination. For the first quarter of the year, the United States Mint struck 1.37 billion cents, an increase of 27.75% compared to the year ago period.

Production of the nickel or five cent coin has increased by an even greater percentage. The 274.56 million nickels produced during the first quarter represents an increase of 78.47% above the year ago production level.

This year, the situation may prove different following the increased production levels for the cent and nickel combined with the suspension of production for circulation of the Presidential Dollar. The Treasury Department had announced the suspension in December as a cost savings measure, although the production of $1 coins was actually responsible for the majority of the seigniorage generated by the US Mint.

The Mint is currently conducting research and development activities with regards to alternative coinage materials, which could reduce production costs and increase seigniorage. Authority to conduct these activities was granted by Congress under the Coin Modernization, Oversight, and Continuity Act of 2010. The Mint is required to submit a report to Congress with findings and recommendations near the end of this year. Any actual changes in coinage composition would still need to be accomplished through an act of Congress.