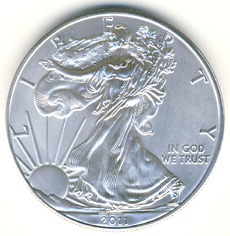 During January 2011, the United States Mint recorded their highest ever monthly sales of the American Silver Eagle. The total sales of 6,422,000 of the one ounce silver bullion coins broke the previous record set in November of last year by more than 2 million ounces.

The record breaking sales come during a month when the price of silver declined by more than 9%. It was also the same month that the US Mint first made the 2011 Silver Eagle available to authorized purchasers (AP’s). The newly dated coins were launched under the US Mint’s standard allocation, or rationing, program which limits the number of coins that each of the eleven AP’s can order.

Under typical procedures, the AP’s order the American Silver Eagles from the United States Mint based on the price of silver plus a premium of $2 per coin. The coins are then resold to other precious metals dealers, coin dealers, and the public.

During the month, the US Mint also sold 133,500 ounces worth of gold bullion through the American Gold Eagle offerings. The majority of sales were derived from the one-ounce size, with minor amounts of fractional weight coins also sold. This exceeds the total gold bullion sales of 85,000 achieved during the year ago period. However, this month’s total remains far from the monthly record of 692,000 ounces reached in October 1986 when the coins were first offered to the public.

So far, the US Mint has not released the 2011 American Gold Buffalo coins. Last year, the 24 karat gold bullion coins were not available until April.

Similarly, the 2011-dated America the Beautiful Silver Bullion Coins have not yet been released, although production has already begun. Last year, this series of 5 ounce silver coins generated controversy due to the low mintages and circumstances of distribution.