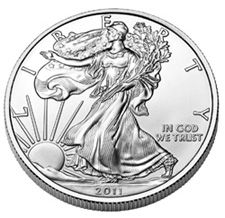 Sales of the United States Mint’s gold and silver bullion coins rose for the month of December 2011, reversing the slow down experienced in the previous month. Annual sales totals include a new record for American Silver Eagle bullion coins.

During the month of December 2011, the US Mint sold 2,009,000 of the one ounce Silver Eagles. This marks an increase from the 1,384,000 coins sold in the previous month, but still represents the second lowest monthly total for the year. The monthly sales for the five ounce America the Beautiful Silver bullion coins reached 4,400, up from the 3,300 sold in the previous month.

The annual sales total for Silver Eagles has reached 39,868,500, setting a record for the fourth consecutive year. Starting in 2008, demand for Silver Eagles increased sharply, resulting in periodic sales suspensions and frequent allocation of available supplies. In the ensuing years, the US Mint has managed to increase the number of coins available. Most recently, the Mint announced that they intend to begin accepting orders for the 2012-dated coins without allocation. 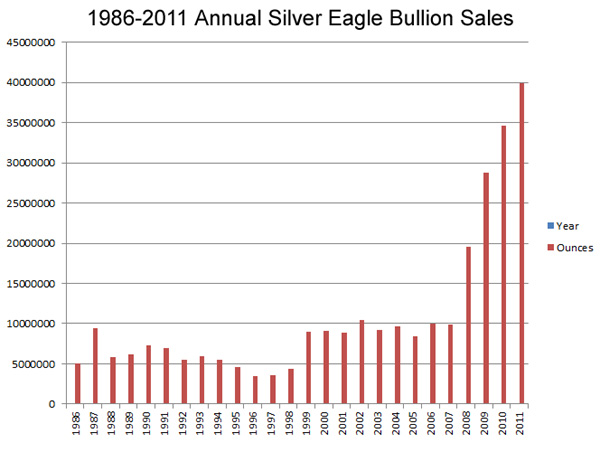 The America the Beautiful Five Ounce Silver Bullion Coins achieved sales of 397,700 for the year. This is only the second year for the program. In 2010, only 165,000 coins were sold due to delays in full scale production.

The annual sales for Gold Eagle bullion coins reached exactly 1,000,000 troy ounces. This represents a decline from the 2010 annual total of 1,220,500 ounces. Starting today, the US Mint will begin accepting orders for 2012 Gold Eagles, including both one ounce and fractional weight coins.

American Gold Buffalo annual sales were 174,500, down from the 209,000 sold in the previous year. The US Mint still has an inventory of 2011-dated coins that will continue to be available to authorized purchasers. The 2012-dated coins are expected to be available in March.