After breaking a record for monthly sales in the previous month, sales of the United States Mint’s American Silver Eagle bullion coins cooled, although levels remain significantly higher than the year ago period. The 2011 American Gold Eagle bullion coins were offered in fractional weights for the first time. 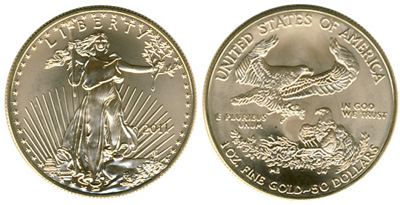 During February 2011, the US Mint recorded sales of 3,240,000 of the one ounce bullion Silver Eagles. This is down nearly 50% from the record 6,422,000 ounces sold during January. However, compared to the year ago period, sales show an increase of 58%. The US Mint did not offer any other silver bullion coin options during the month, although production of the 5 ounce 2011 America the Beautiful Silver Coins is reported to have begun.

Gold bullion coin sales for the month reached 92,500 ounces across all available options. This consisted of 72,500 of the one ounce American Gold Eagles and 20,000 ounces derived from sales of the one-half ounce, one-quarter ounce, and one-tenth ounce versions. The US Mint began selling fractional weight 2011 Gold Eagles for the first time during the month. Sales of the one ounce 24 karat American Gold Buffalo are still yet to begin.

The price of gold recently traded at a fresh all time high above $1,440 per troy ounce. Silver prices are at a 31-year high above $34 per ounce.