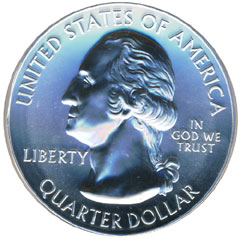 Following several months of slower sales, the United States Mint’s gold and silver bullion coins saw a boost during the month of May. The American Gold Eagles and American Silver Eagles each experienced sales significantly higher than the prior month. Meanwhile, the US Mint began sales of the first 2012 America the Beautiful Five Ounce Silver Bullion Coin featuring El Yunque National Forest.

During May 2012, Gold Eagle bullion coin sales totaled 53,000 troy ounces across the four different sizes. This was more than double the 20,000 ounces sold in the previous month. However, this total still falls significantly lower than the year ago period of May 2011 when sales had reached 107,000 ounces.

The situation was similar for the one ounce Silver Eagle bullion coins, which sold 2,875,000 coins during the month. This surpassed the prior month total of 1,520,000 coins, but failed to reach the amount of 3,653,500, which was sold in the year ago period.

During every month for the year to date, Gold and Silver Eagle bullion sales have come in lower than the same month in the year ago period.

May 2012 US Mint Bullion Coin Sales

On May 21, 2012, the US Mint began sales of the first of the 2012-dated America the Beautiful 5 oz. Silver Bullion Coins. Sales for this design reached 5,400 coins, representing 27,000 troy ounces of silver. The final three 2011-dated coins of the series also remain available for sale, but contributed only another 200 coins to the monthly total.

The opening sales of the El Yunque National Forest 5 oz. Silver Coins is slower than experienced for previous designs of the series. Last year, the first two designs had sold out of the initial production of 126,700 coins in less than a month. Sales were slower after that point, but the fifth design released on July 18, 2011 had still managed to sell 15,200 coins by the end of the opening month.