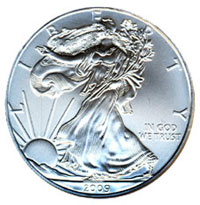 The United States Mint saw bullion products revenue rise by 78.63% to nearly $1.7 billion for the 2009 fiscal year, amidst heightened demand for gold and silver bullion coins. The strong performance of this segment was a major contributing factor to the record overall revenue achieved for the year. See the previous article summarizing the US Mint’s overall 2009 Financial Results.

The US Mint produces and issues gold, silver, and platinum bullion coins though a network of authorized purchasers. This select group is able to buy the coins directly from the Mint at the same market price paid for the metal plus a fixed mark up.

The authorized purchasers resell the coins to other dealers and the public and are also required to maintain a two way market for the coins. Because the purpose of the bullion program is to make precious metals available at minimal cost to investors, the Mint earns only a nominal net margin on bullion sales.

During the fiscal year ended September 30, 2009, the US Mint recorded revenue of $1.69 billion through the bullion program. This represented an increase of 78.63% from the prior year and an all time record high. The US Mint’s Annual Report cited “uncertainty surrounding traditional investments and concerns about future inflation” as the drivers for the surge in sales. The bullion program yielded net income of $32.7 million, representing a scant net margin of 1.93%.

Amidst the record setting year, the United States Mint experienced difficultly keeping up with full demand for their bullion coins. In response, they implemented ordering limits and a standard allocation program. They also allocated all incoming precious metals blanks to the production of bullion coins that were legally required to produce, and suspended production of certain bullion products and collectible precious metals products that were not legislatively mandated. Finally, the US Mint added one additional bullion coining press at the West Point facility and worked with suppliers to increase the supply of precious metals blanks. These steps had an impact on the breakdown of sales for each bullion program.

American Gold Buffalo bullion coin sales declined by 87.73% to $20.9 million. For the majority of the fiscal year, production and sales of the 24 karat one ounce gold coins was suspended. The Mint took this step in order to divert planchet supply to the American Gold Eagle program.

Towards the end of the 2009 fiscal year, the United States Mint was able to catch up with demand and lift the allocation program and ordering limits. They were also able to resume production of Gold Buffalo bullion coins and fractional weight Gold Eagle coins in the first quarter of the following fiscal year. Unfortunately, a resurgence in demand once again necessitated the suspension of gold and silver bullion products and the reimplementation of the allocation program.