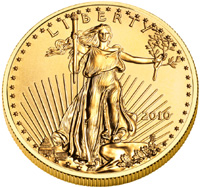 Revenue from the United States Mint’s American Eagle and American Buffalo Bullion Coin Programs rose to a record high of more than $2.8 billion for the fiscal year ending September 30, 2010. This represents an increase of 68.5% from the prior year, driven by higher prices and volumes.

The US Mint manufactures and issues gold, silver, and platinum bullion coins through a network of authorized purchasers. The bullion programs were authorized by Congress to provide investors with a convenient and cost effective method for adding physical precious metals to their portfolios. The weight, content, and purity of the bullion coins are guaranteed by the United States government.

For three consecutive years, bullion program revenue has achieved new record highs. Compared to 2007, revenue for the latest fiscal year is up more than 700%. The US Mint attributes the increased demand for bullion coins to “uncertainty surrounding traditional investments and concerns about future inflation.”

Because the program is managed to a nominal net margin, the surging revenue from bullion coins has a limited impact on the United States Mints total net income and seigniorage. Overall 2010 financial results were dragged down by a larger decline in seigniorage generated from the issuance of circulating coins.

The US Mint is required by law to produce American Gold and Silver Eagle bullion coins in quantities necessary to meet public demand. However, in recent years the quantities have been limited based on the number of precious metals planchets that the US Mint could acquire from their suppliers. At times when the demand for bullion coins has exceeded the supply of available planchets, the US Mint has imposed order limits, rationing programs, and diverted planchet supplies from numismatic programs.

For the 2010 fiscal year, American Gold Eagle sales revenue rose by 33.8% to $1,710.8 million. The increase was led by sales of fractional weight versions of the coins. The US Mint first released both the 2009 and 2010-dated one-half, one-quarter, and one-tenth ounce Gold Eagles during the fiscal year.

American Gold Buffalo bullion coins rose significantly to $484.7 million compared to just $20.9 million in the prior year. During the current fiscal year, both 2009 and 2010-dated coins were released by the US Mint. In the prior year, revenue reflected final sales of only a small quantity of 2008-dated coins remaining in inventory.

The US Mint did not produce or issue any American Platinum Eagles during the year. As there is no statutory requirement to produce the coins, the US Mint suspended production at the end of the 2008 calendar year to divert capacity to gold and silver bullion programs.