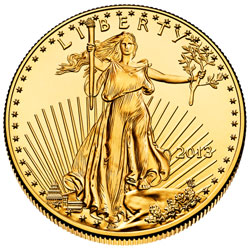 The United States Mint’s bullion program delivered stellar results during the fiscal year ended September 30, 2013. A sharp increase in demand drove record sales volume of 45,862,000 ounces of gold and silver bullion. Total revenue for the segment grew by 31.8% to more than $3.2 billion with net income more than doubling to $59.3 million.

The United States Mint manufactures gold and silver bullion coins which are issued to a network of authorized purchasers based on the market price of the metals plus a premium. The authorized purchasers distribute the coins more broadly to the public and agree to maintain an open two-way market for the coins, assuring their liquidity.

After two previous years of declines, the US Mint saw gold bullion sales rebound sharply during the year. American Gold Eagle sales grew by 51.9% to 983,000 ounces and American Gold Buffalo sales grew by 66.7% to 235,000 ounces. The increased demand was driven in part by a decline in the market price of gold. When gold posted its largest one day percentage drop in 30 years on April 15, 2013, authorized purchasers ordered more than 100,000 ounces of gold during the next three days. The jump in demand resulted in the temporary sell out of the one-tenth ounce sized American Gold Eagles.

The US Mint achieved record breaking volume in silver bullion coin sales at 44,644,000 ounces across the two offerings. Sales of the American Silver Eagle bullion coins grew by 29.2% compared to the prior year, while the lower volume America the Beautiful Silver Bullion Coins saw growth of 143.8%. Amidst high demand, the Silver Eagles remained subject to allocation from January 28 through the end of the fiscal year. During times when demand exceeds available supply, the US Mint has used an allocation program to ration the available number of coins amongst authorized purchasers.

The US Mint’s four bullion programs generated net income of $59.3 million for the fiscal year. This was an increase of 108.8% compared to the $29.4 million in net income for the prior year.