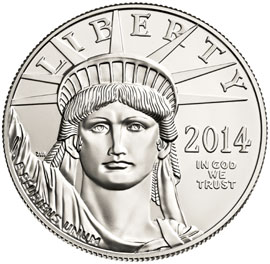 The United States Mint’s bullion coin program experienced declines in both sales volume and revenue during the fiscal year ended September 30, 2014. Sales volume fell by 13.5% to 39,684,000 ounces of gold and silver content. Total revenue declined by 44.1% to $1.8 billion, sending net income down by 52.8% to $28 million.

The United States Mint manufactures gold, silver, and platinum bullion coins which are issued to a network of authorized purchasers based on the market price of the metals plus a fixed or percentage markup. The authorized purchasers distribute the coins more broadly to the public as well as maintain a two-way market for the coins, assuring their liquidity.

Bullion products offered by the Mint during the 2014 fiscal year included the American Gold Eagle, American Silver Eagle, American Gold Buffalo, America the Beautiful Five Ounce Silver Coins, and the reintroduced American Platinum Eagle. The weight, content, and purity of all bullion coins are guaranteed by the United States government.

The demand for US Mint gold bullion coins fell sharply compared to the prior year. American Gold Eagle sales volume fell by 46.7% to 524,000 ounces and American Gold Buffalo sales fell by 24.3% to 178,000 ounces.

Demand for silver bullion coins saw a more modest decline during the fiscal year, with the popular American Silver Eagle dropping by 12.1% to 38,285,000 ounces. The America the Beautiful Five Ounce Silver Bullion Coins, which only account for a relatively small portion of silver bullion sales, dropped by 37.1% to 683,000 ounces.

The US mint reintroduced the American Platinum Eagle bullion coins in response to increased market interest. The bullion coins had not been offered since 2008 when production was suspended in relation to the economic crisis. During the fiscal year, the coins were offered in one ounce size only and recorded sales of 14,000 ounces.

Net margins were strongest for the America the Beautiful Five Ounce Silver Bullion Coins at 3.3%, followed by the American Gold Eagle at 2.5%, and American Gold Buffalo at 2.0%. The American Silver Eagle managed a slim margin of 0.7%, while the American Platinum Eagle generated a negative margin.