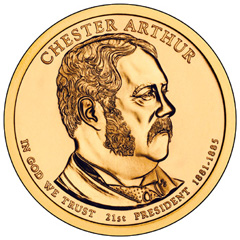 Today April 5, 2012, the United States Mint will launch the Chester A. Arthur Presidential Dollar, honoring the 21st President of the United States. This latest release will represent a shift for the ongoing series of $1 coins, which were previously distributed to the channels of circulation by Federal Reserve Banks. Now, the coins will only be available for purchase directly from the Mint at a premium to face value.

The change follows a decision from the Treasury Department to suspend production of the series for circulation as a cost cutting measure. According to the Treasury, the move would save $50 million annually over the next several years. Others have argued that eliminating the paper $1 bill and ramping up production of $1 coins would yield greater savings over the long term, often citing reports issued by the Government Accountability Office or the experiences of other countries. Bills have been introduced in both the House and Senate, which would mandate the transition from bills to coins over a period of five years.

For the time being, the series will continue at limited production levels with distribution geared primarily towards collectors. Preliminary production figures provided by the United States Mint show that 5.74 million Chester Arthur Dollars have been produced. This compares to production of 74.2 million for the previous release featuring James Garfield. The US Mint has reserved the right to restart production of the Chester Arthur Dollar within the calendar year, as dictated by numismatic sales demand during the course of the year. 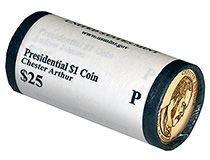 In previous years, the 25-coin rolls had been available priced at $39.95 each. For certain designs, 250-coin boxes were available through the Direct Ship Program at face value with no charge for shipping. This program was quietly canceled earlier this year without explanation.