Today, June 30, 2011, the United States Mint began sales of the 2011 Proof American Silver Eagle. This concludes a busy month for US Mint products, with the release of two different 5 oz silver coins, a half ounce 24 karat gold coin, and one ounce silver medals. 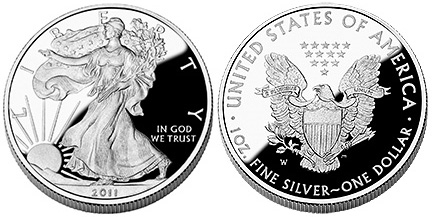 The obverse of the 2011 Proof Silver Eagle features a rendition Adolph A. Weinman’s design for the Walking Liberty Half Dollar, originally issued for circulation from 1916 to 1947. The full figure of Liberty appears striding confidently towards a rising sun, with a flag draped across her shoulders and a hand outstretched. The reverse of the coin features a heraldic eagle with thirteen stars above, as designed by John Mercanti specifically for the series.

Each coin is struck in .999 fine silver and has a weight of one troy ounce. The proof finish has frosted raised design elements and a mirror like background to create a cameo effect. All coins are struck at the West Point Mint and carry the “W” mint mark.

Pricing has been established at $59.95 per coin and a household order limit of 100 coins will be imposed for the start of sales. No maximum mintage level has been specified. Orders may be placed online at http://www.usmint.gov/catalog/