Earlier today, the United States Mint began accepting orders for one ounce silver national medals issued in commemoration of the 10th anniversary of the September 11, 2011 terrorist attacks and the establishment of the National September 11 Memorial & Museum at the World Trade Center. The medals are struck in proof quality and have a maximum mintage of 2 million pieces. 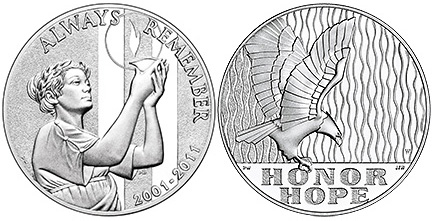 The obverse of the medal features Lady Liberty holding the Lamp of Remembrance. Two beacons of light appear behind her, stretching skyward. This image is intended to symbolize not only the immeasurable loss on that fateful day, but also the resiliency and triumph of those who persevered. The reverse of the coin features an eagle against a backdrop of cascading water to symbolize the strength of the survivors and the peace, serenity, healing, and continuity of life.

A ceremony was held at the 9/11 Memorial Preview Site to mark the opening of sales. In attendance were Treasurer of the United States Rosie Rios, U.S. Representative Jerrold Nadler, who sponsored the authorizing legislation for the medals, and President and CEO of the National September 11 Memorial & Museum Joe Daniels.

Rosie Rios said, “This medal’s design is intended to exalt the memory of those that sacrificed their lives or were injured, and the families who continue to show dignity and strength in the face of terrible loss.”

The September 11 National Medals will be struck at the West Point and Philadelphia Mint facilities and bear the “W” or “P” mint mark. Each version can be purchased at the United States Mint for $56.95 during an introductory period from June 20 to August 18, 2011 at 5:00 PM ET. After this period, the price of the medals will be $66.95. The cost of each medal includes a surcharge of $10 payable to the National September 11 Memorial & Museum to support operations and maintenance.

The medals are expected to begin shipping from the United States Mint around September 1, 2011. Orders may be placed at http://catalog.usmint.gov/