The United States Mint recently began sales of a coin album for the America the Beautiful Quarters Program. From 2010 until 2021, circulating quarter dollars will be released featuring a different National Park or national site in each of the 50 states, 5 U.S. territories, and the District of Columbia. 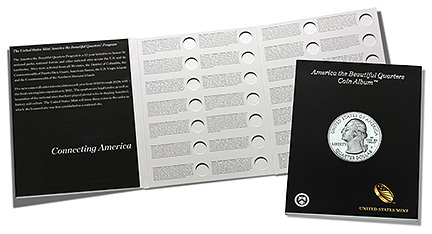 The album is designed in the style of the US Mint’s newly adopted “brand promise and identity”. This style has featured black backgrounds or elements containing the new US Mint logo and Treasury Department seal.

Based on the images provided by the Mint, a single space seems to be available for each of the 56 quarters planned to be released for the series. The album is designed to store and showcase the collection and includes interesting facts and information about each site.

Priced at $9.95 each, the albums can be purchased online at http://catalog.usmint.gov/