The United States Mint continues to offer for sale the 2011 September 11 National Medals. The Mint first began accepting orders for the proof quality one ounce silver medals on June 20, 2011.

The medals were authorized under Public Law 111-211, which provides for the striking and issuance of silver medals with designs emblematic of the courage, sacrifice and strength of those individuals who perished in the September 11, 2001 terrorist attacks; the bravery of those who risked their lives to save others that day; and the endurance, resilience and hope of those who survived. The maximum authorized mintage for the medals is 2 million. 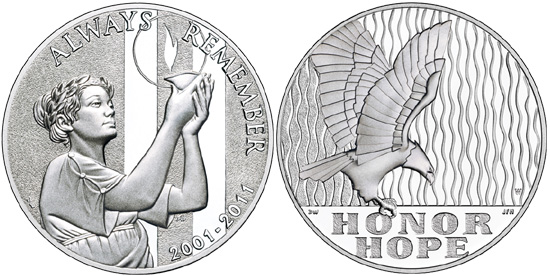 The obverse design features Liberty holding the Lamp of Remembrance, while two beacons of light extend skyward in the background. Liberty, the lamp, and the light symbolize not just the immeasurable loss on that fateful day, but also the resiliency and triumph of those who persevered. The inscriptions include “Always Remember” and the dates “2001-2011”.

The reverse design depicts an eagle against a backdrop of cascading water. The inscriptions “Honor” and “Hope” appear below. The eagle symbolizes the strength of the survivors, families, and Nation, while the water is emblematic of peace, serenity, and the continuity of life. Both the obverse and reverse were designed by Donna Weaver and sculpted by Joseph Menna.

Available from either the West Point Mint or Philadelphia Mint, the medals are priced at $66.95 each. This prices includes a $10 surcharge distributable to the National September 11 Memorial & Museum to support its operations and maintenance after completion.

Orders placed during the introductory period have already begun to ship. Any orders placed before August 18 will include a complimentary 8″ X 10″ document showcasing the artwork for the medal design, signed by the the Acting Director of the US Mint. For eligible orders, these documents will ship separately beginning on September 16, 2011.

The September 11 National Medals are authorized to be struck until December 31, 2012. There is no sales ending date specified under the legislation, however the US Mint has stated that sales would conclude in December 2012.

Orders may be placed for the medals on the United States Mint’s website at http://catalog.usmint.gov/