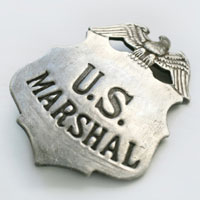 On October 29, 2009, a bill was introduced in the Senate which seeks to authorize commemorative coins for the 225th anniversary of the establishment of the United States Marshals Service. The bill includes some unusual characteristics for the gold coins which would be issued under the program, and some very specific guidelines on the issuance of the coins.

S. 2106 United States Marshals Service 225th Anniversary Commemorative Coin Act was introduced by Blanche Lincoln of Arkansas. It follows a similar bill H.R. 2799 introduced on June 10, 2009 by John Boozman of Arkansas. The bills seek the issuance of up to 100,000 $5 gold coins and up to 500,000 $1 silver coins bearing designs emblematic of the achievements of the United States Marshals service.

The US Marshal gold coin would be struck in high relief and carry incused edge lettering with the motto of the US Marshals Service. The $1 silver coin would also include incused edge lettering. These are not typical features for commemorative coins. These unusual characteristics bear similarities to features of this year’s popular 2009 Ultra High Relief Double Eagle Gold Coin. This specially issued recreation contains one ounce of gold, is struck in ultra high relief, and includes edge lettering.

Specific guidelines are provided related to the issuance of the US Marshals coins. Commencement of issuance should begin on or after September 24, 2014, except for a small number to be issued to the US Marshals Service and employees for display and presentation during the anniversary celebration. Prepaid orders at a reasonable discount must be accepted, and arrangements should be made to ensure that current, former, and retired employees of the US Marshal Service have an exclusive defined period to place orders. Coins may not be minted after December 31, 2014.

In order for the US Marshals Commemorative Coins to be produced in 2014, the bill must be approved in the House and Senate, and then signed into law by the President. The bill has been referred to the Committee on Banking, Housing, and Urban Affairs.