Today, January 31, 2011, the United States Mint began accepting orders for the 2011 United States Army Commemorative Coins. The program includes $5 gold coins, silver dollars, and clad half dollars issued to recognize and celebrate the founding of the U.S. Army in 1775.

The coins were authorized under Public Law 110-450, the United States Army Commemorative Coin Act of 2008. The prices for each coin include surcharges of $35 for each gold coin, $10 for each silver dollar, and $5 for each half dollar, which are distributable to the Army Historical Foundation to support the construction of the National Museum of the United States Army at Fort Belvoir, Virginia.

Sales of the commemorative coins will continue until the maximum authorized mintage has been sold, or until a subsequently announced sales ending date, typically in mid-December. The US Mint offers each coin through individual sales, in proof or uncirculated format. No multi-coin sets or other collector products are expected to be available. 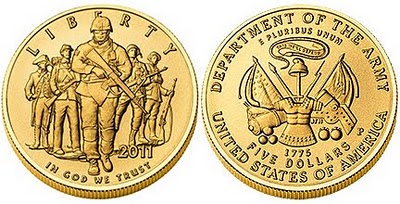 The $5 gold coin is intended to represent the U.S. Army’s service in war, with depictions of soldiers from different eras. From right to left are soldiers from the Revolutionary War, Civil War, modern era, World War II, and World War I. On the reverse of the coin is the official emblem of the U.S. Army including their motto “This We’ll Defend”. 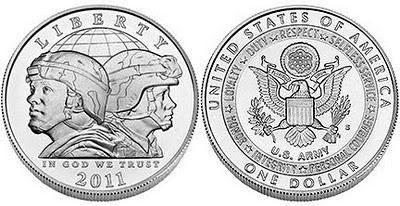 The silver dollar symbolizes the worldwide deployment of the 21st century U.S. Army. On the obverse is a depiction of a male and female solider with a globe in the background. The reverse features an image of the Great Seal of the United States, which has been worn on U.S. Army dress and service uniforms since the early 1800’s. Surrounding the Seal are the seven core values of the U.S. Army: Loyalty, Duty, Respect, Selfless Service, Honor, Integrity, and Personal Courage.

The proof version of the coin is struck at the Philadelphia Mint and priced at $54.95 during the introductory period and $59.95 after March 2. The uncirculated version is struck in San Francisco and has an introductory price of $49.95 and regular price of $54.95. The maximum authorized mintage across both versions is 500,000. 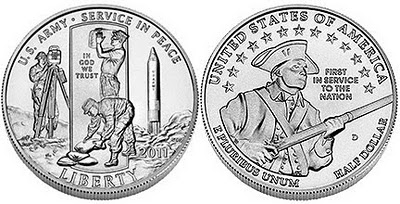 The obverse of the half dollar symbolizes the U.S. Army’s service during peacetime. A series of three images appears which depict a solider surveying, two servicemen building a flood wall, and the Redstone Army rocket. The reverse symbolizes the Army as the first military service to defend the country. An enlisted Continental solider armed with a musket is shown. An inscription reads “First in Service to the Nation”, and thirteen stars appear above.