Upper Deck, a leading sports-trading-card company, wants to bring sports-card-style engagement to the collector-coin format. The Grandeur Hockey Coin Collection, unveiled April 4 at the National Hockey League Hall of Fame in Toronto, is the first series of limited-edition, precious-metal coins to be distributed in “blind packaging.” For those who aren’t familiar with the trading-card hobby, buying a blind pack means you don’t know what coin(s) you get until you open the actual packaging. 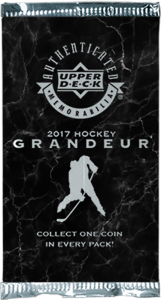 A blind-pack containing a single coin, which could be any one of four different strikes from any of 20 different players.

The Grandeur Hockey coins are minted in North America and are legal tender in the Cook Islands. The series consists of 20 sets, with each set featuring a different professional hockey superstar, either active or retired—players like Wayne Gretzky, Connor McDavid, Sidney Crosby, Alex Ovechkin, and Henrik Lundqvist. The players have partnered with Upper Deck through the National Hockey League Players’ Association (NHLPA); the National Hockey League (NHL) is not involved, and the team names and logos do not appear on the coins. 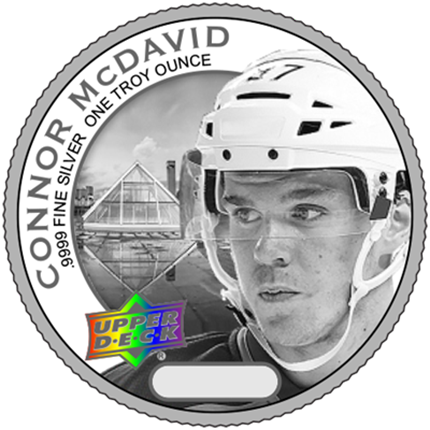 The reverse design consists of the player’s portrait to the right of the field against a central background depicting a landmark from the city of the team with which the player is most associated. (This background is the section with applied color for the base-set coins.) The player’s name appears at upper left. The Upper Deck logo, with an applied hologram to guarantee authenticity, appears near the bottom, above an oval that displays the coin’s number. Each number includes the total mintage; for example, if a coin is the 97th gold strike in the Wayne Gretzky set, the number reads “097-100.” 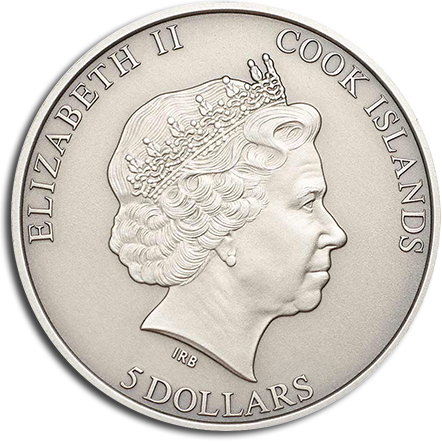 The obverse of the Cook Islands’ 2016 Space Shuttle silver coin, with the Ian Rank-Broadley portrait used on the Grandeur Hockey coins. The legend on the latter is somewhat different; see the text description.

The obverse of each coin depicts the Ian Rank-Broadley portrait of HM Queen Elizabeth II, which was introduced on New Zealand’s coinage in 1999. The portrait is surrounded by the legend ELIZABETH II / COOK ISLANDS / 5 DOLLARS, which reads clockwise from lower left. The date of issue, 2017, reads counterclockwise and is placed below the effigy.

Each Grandeur Hockey Coin may be purchased separately in a sealed blind-pack for $99, or as part of a collector box with four randomly chosen coins for $399. The box contains slots for 20 coins; the four coins that come with the box are guaranteed to contain one of three rarer coins—high-relief silver, frosted silver, or gold. 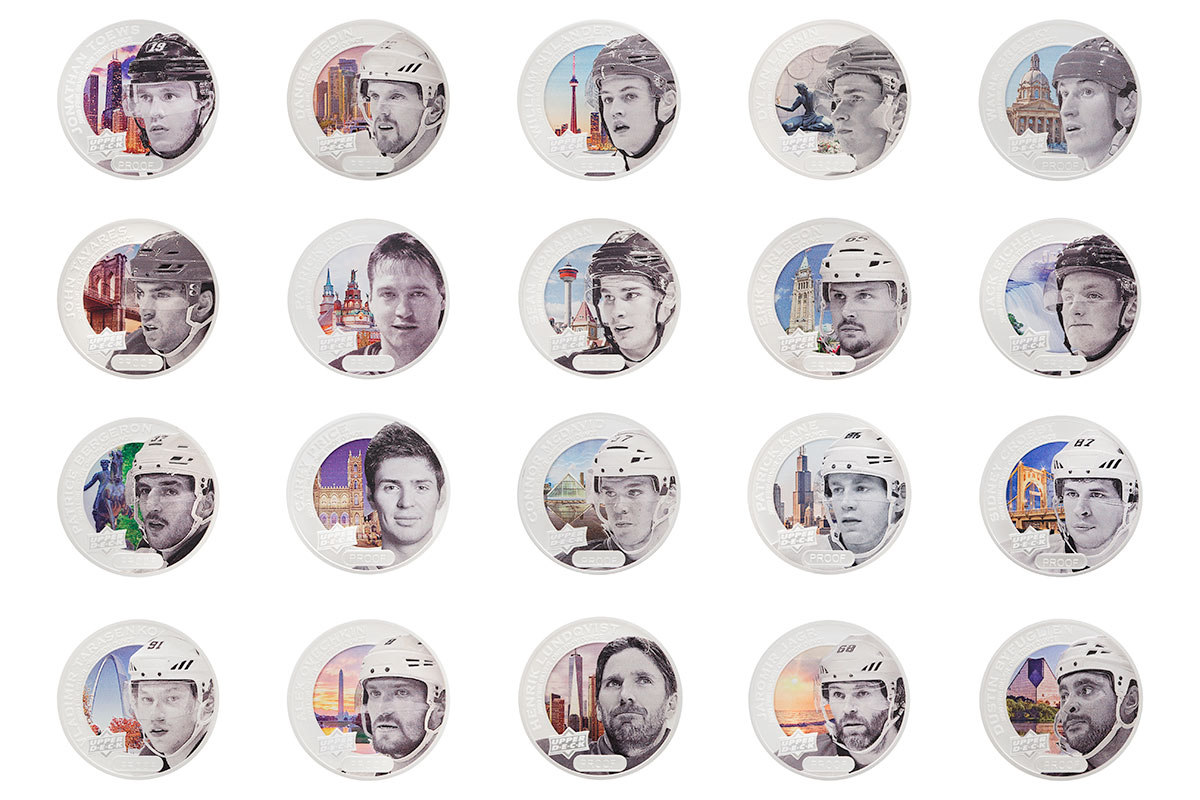 A complete “base set,” consisting of all 20 colorized coins. (Hover to zoom.)

Assembling a complete set means either trading with other collectors or else buying blind packs until you have one of each coin. For example, you might trade five colorized coins representing five different players for one high-relief Wayne Gretzky. In addition, Upper Deck’s e-Pack website allows players to trade coins for cards and vice versa.

The complete series consists of the following players:

The coins are available for purchase on Upper Deck’s e-Pack platform or the website of CIBC (Canadian Imperial Bank of Commerce).

The Origin of the Series

Upper Deck has been producing collectible sports cards since 1989. The company president, Jason Masherah, seems well aware that taking the trading-card model into a new field is a risk, but it also appears that the project was undertaken with careful consideration. Bringing coins to the familiar market of sports-card collectors was relatively easy; in an interview with Yahoo! Sports writer Greg Wyshynski, Masherah says that sport-card collectors are already willing to spend hundreds of dollars on a mystery pack of high-end trading cards. As for bringing the blind-pack model to coin collectors, Masherah notes that the public in general has grown used to spending money on expensive “surprise” packages, like wine-of-the-month clubs. In theory, enough coin collectors will share qualities with sports-card collectors or other buyers of high-end blind-packs to make the new program attractive to them.

Upper Deck faced a learning curve with respect to what coin collectors will buy. One lesson was what constitutes a “coin.” To be sure, the definition is a bit looser for collector coins than for traditional circulating coinage, but certain criteria still apply. The main criterion is that a coin must be legal tender issued by a national government. Since the United States doesn’t enter licensing deals with its coinage, Upper Deck partnered with the Cook Islands, New Zealand, for its project.

Of course, Upper Deck still has a bit to learn about the numismatic market. A few random observations:

This is meant as constructive criticism rather than as a knock on Upper Deck, which is taking a bold risk with a very intriguing item. There’s still time for the company to make a few edits to its promotional materials and add a few good photos. With silver trading around $18 an ounce, a hundred bucks is stretching the limit for a 1-ounce coin, so traditional numismatists will likely take a pass unless they have faith in the coins’ value as collectibles. It’s a bit different for buyers of collector coins, who are willing to pay a premium for something they like without fretting over whether they can profit from it. If the series takes off with the latter market, Upper Deck could have quite a winner on its hands.   ❑

Canada: That Special Day for Couples Celebrated with Unique Silver and Rose-Gold Coin