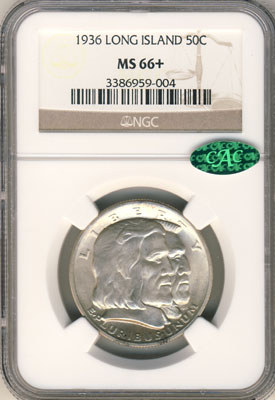 I send raw coins to both PCGS and NGC, using the former for set registry submissions and the latter for 20th century U.S. coins, especially Franklin half dollars and modern commemoratives. I especially value NGC’s quick turn-around times as well as the company’s excellent customer service.

NGC also is my preferred holdering company for toned coins because the white label accentuates darker rainbow hues. The larger label also allows for all those grading amenities, including plus, star and VAM designations with room for a CAC sticker. I don’t do many CAC stickers, but I do VAMs, and a simple submission can end up with a lot of text on that label.

However, as readers of Coingrader Capsule know, I do send more submissions to PCGS because of registries and thus tend to know its price values and grading standards a wee bit better than those of competitor NGC.

Moreover, Coin Update’s Michael Zielinski and I have been reporting regularly on plus and star grades since 2010. Here is one of Zielinski’s first posts on the matter.

To be honest, I haven’t received many plus grades from either NGC or PCGS, but I am quite familiar with PCGS’s price values–especially regularly updated ones featured in PCGS CoinFacts. Plus values in PCGS are meticulously calculated, not by a simple percentage–a 20% bump in value for any plus coin, say–but by each coin’s relative scarcity and condition rarity.

And that underscores why I am focusing on the identical $188 values given to my two 1956 full bell line Franklins, one a plus and one not.

According to the NGC census, the company has graded 136 coins in that year as having full bell lines at MS66. That may justify the $188. But NGC’s census also discloses that only 5 coins have been rated higher, at MS67 FBL. Thus, it would seem, my two coins should not have the same $188 value as if designated by an NGC “star” for eye appeal. Eye appeal literally is in the eye of the beholder, as well as the holder. But a plus is a grade, and condition rarities were one of the main reasons why the plus grade was developed by both NGC and PCGS in as much as certain coins are better than one grade but not quite up to snuff for the next higher one. 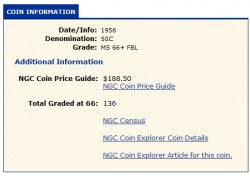 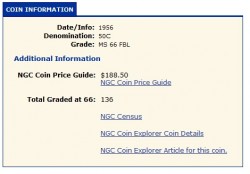 Initially, I thought the $188 value on the full bell line plus coin was an NGC typo. Upon inquiring, I learned that NGC doesn’t do its own pricing. NumisMedia does. I telephoned that company and learned that it plans to do plus pricing in the future, but doesn’t currently offer that service … which means NGC doesn’t, either.

And that’s a problem.

When I bid on NGC and PCGS coins, I don’t necessarily use price guides. I use CoinFacts or NGC certification verification. So, if I were placing a bid on a 1956 MS66+ FBL Franklin, I’d see the $188 value and probably do a maximum of $100-$120 (without buyer’s premium, shipping, etc.).

What does this actually mean? NGC plus grades may be undervalued. Grading standards are different, of course; but crossing over NGC plus grades to PCGS on certain condition rarity coins, just may make investor sense.

The absence of plus price grading at NGC also makes me wonder whether I should send more submissions to PCGS because of more accurate pricing values. What are your thoughts?