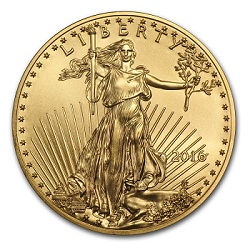 The U.S. Mint has conceded that as many as 63,000 one-ounce American Eagle gold bullion coins were accidentally struck with high relief obverses, according to Coin World. The Mint is investigating the circumstances that led to the abnormality, which causes the coins to scrape against one another when stacked, as the rims were struck to the appropriate dimensions.

Coin World learned of the development through an anonymous tip, and Tom Jurkowsky, director of the Mint’s Office of Corporate Communications, subsequently disclosed the 63,000-coin estimate.

Some bullion shipments containing the high relief Gold Eagles went out to the Mint’s authorized purchasers, as confirmed by Mark Oliari of Coins ‘N Things. No images of the coins in question have yet become available. The full article is available over at Coin World.