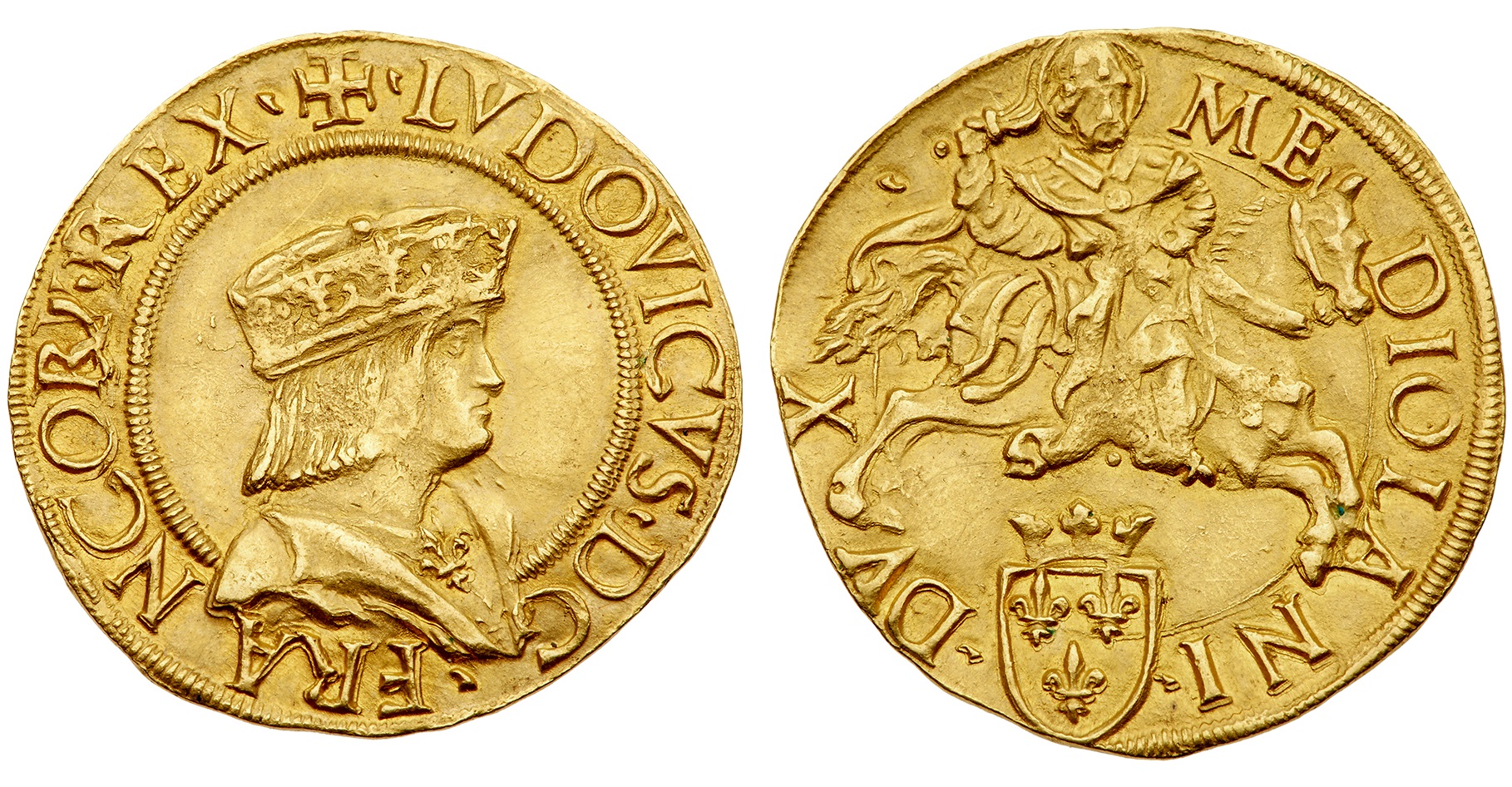 A rare Doppio ducat of French King Louis XII as the Duke of Milan (1499-1512) is one of the many highlights of the “Tyrants of the Tyrrhenian and Adriatic Seas” exhibit at the September 2018 Long Beach Expo. Photo credit: Lyle Engleson/Goldberg Coins & Collectibles.

(Long Beach, California) August 3, 2018 — Famous gold and silver coins of Italy from the acclaimed Tyrant Collection, ranging from Gelon, tyrant of the cities of Gela and Syracuse in 485 B.C., to King Victor Emmanuel III in 1933, will be publicly displayed together for the first time, September 6-8, 2018.

The unprecedented exhibit, “Tyrants of the Tyrrhenian and Adriatic Seas,” will be a featured attraction at the September 2018 Long Beach Coin, Currency, Stamp & Sports Collectible Expo (Long Beach Expo) in Long Beach, California.

There are 365 historic coins in the $8 million display celebrating numismatic treasures from Sicily on the south to Turin on the north. The exhibit is divided into regions by their boundaries with bodies of water, such as the Arno and Po rivers, and the Adriatic and Tyrrhenian seas, and showcases some exceedingly rare issues. 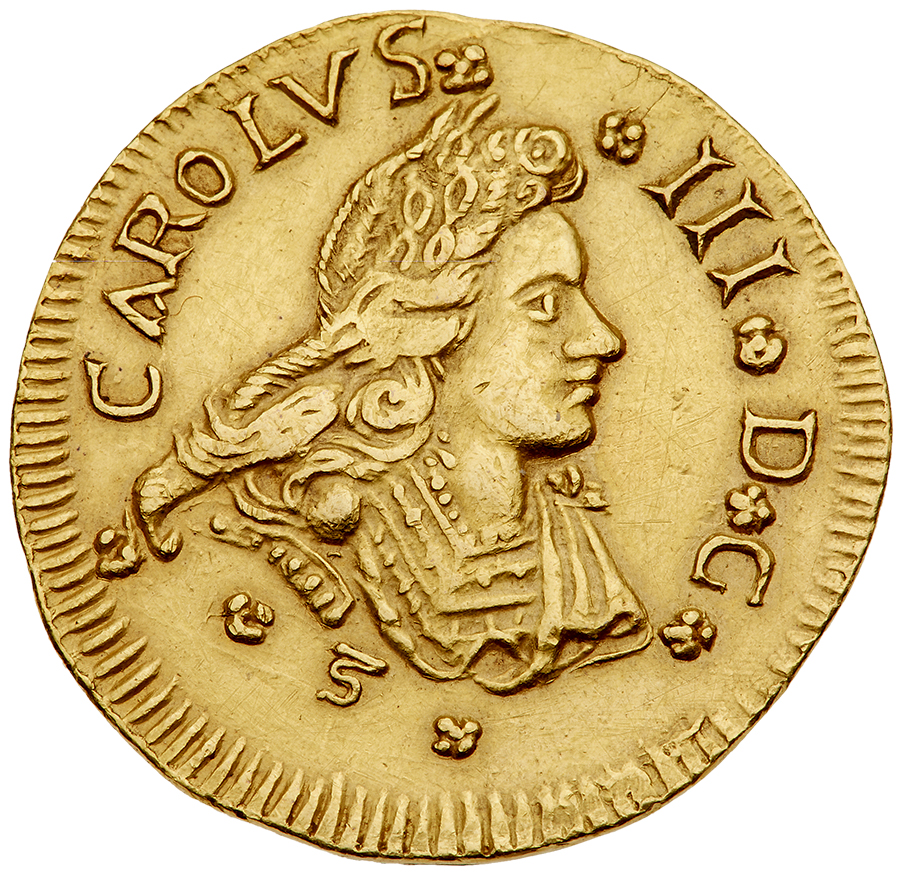 Spanish King Carlos (Charles) III is depicted as ruler of Sicily on this rare gold four-ducati struck in 1727 in Palermo. It is part of the Tyrant Collection’s “Tyrants of the Tyrrhenian and Adriatic Seas” exhibit at the September 2018 Long Beach Expo. Photo credit: Lyle Engleson/Goldberg Coins & Collectibles

“This part of the extensive Tyrant Collection, the world’s most valuable rare coin collection in private hands, encompasses the expansive area that evolved into modern Italy. The impressive coins in the exhibit range from frequently seen ancients to medieval and modern issues of great rarity,” explained Ira Goldberg President of Goldberg Coins and Collectibles, Inc. in Los Angeles, California. Goldberg is one of the numismatic professionals providing guidance in assembling the wide-ranging collection.

“It is a massive collection that vividly depicts the generations of rulers who held sway in their respective regions of old Italy,” said Bruce Lorich, who cataloged the exhibit. 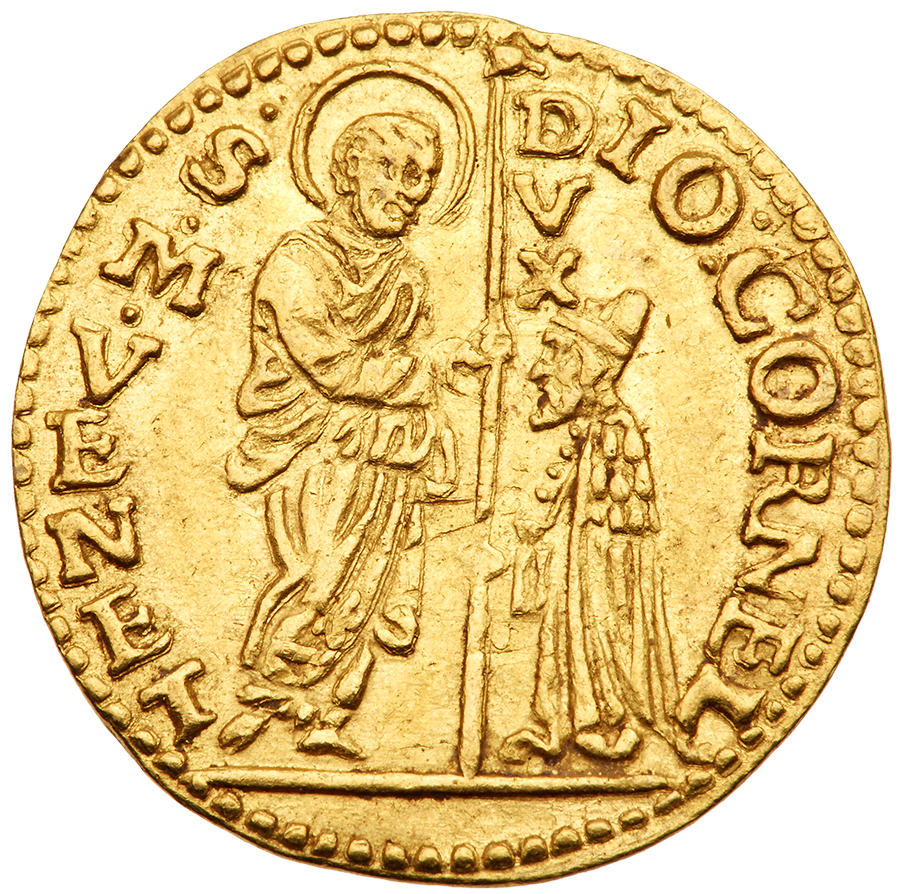 This historic gold zecchino (1625-1629) of the Venetian doge Giovanni I. Corner depicts him kneeling while being blessed by Mark, the patron saint of Venice, and depicts Christ on the reverse side giving a benediction. It is a rarity that is part of a superb collection of Italian gold coins in the September 2018 Long Beach Expo $8 million exhibit “Tyrants of the Tyrrhenian and Adriatic Seas.” Photo credit: Lyle Engleson/Goldberg Coins & Collectibles

Among the many high-quality rarities in the display are gold ducats and zecchino of the Venetian Doges, including Giovanni Dandalo, Giovanni I. Corner and Francesco Contarini, and a Doppio ducat of the French King Louis XII when he was the Duke of Milan from 1499 until his death in 1512. The Venetian gold ducat collection is complete, and the exhibit features the only complete set in private hands of every Doge of Venice who struck a gold ducat.

The extensive array of Sicilian coins in the Tyrants of Charybdis section of the exhibit includes an ancient gold 100-litrae of Dionysios I and a rare gold 1727 four-ducati of Carlo III of Palermo.

The owner of The Tyrant Collection wants to remain anonymous while he shares the collection’s coins with the public for their educational value. This is the third exhibit in a planned multi-year series of different displays at the Long Beach Expo.


Visitors to the September 2018 Long Beach Expo exhibit (booth #807) can receive a free, illustrated educational booklet about this latest, amazing display. Detailed catalogs with information and illustrations about each coin in the “Tyrants of the Tyrrhenian and Adriatic Seas” exhibit will be available for $10 each.