The United States Mint began accepting orders for the 2012 Star Spangled Banner Commemorative Gold and Silver Coins on March 5, 2012 at 12:00 Noon ET. The coin program was authorized by Congress to mark the bicentennial of the writing of the Star Spangled Banner. After Francis Scott key witnessed the 25-hour bombardment of American forces at Fort McHenry during the Battle of Baltimore and saw the American flag still waving at dawn, he was inspired to write a poem, which would be adopted as America’s national anthem.

The Star Spangled Banner $5 Gold Coin carries a design for the theme “The Battles at Sea During the War of 1812.” Depicted on the obverse is a naval battle scene with an American ship in the foreground and a damaged and fleeing British ship in the background. The inscriptions read “In God We Trust”, “Liberty”, and the dates “1812-2012″. The reverse design features the opening words of the Star Spangled Banner,”O say can you see” written in Francis Scott Key’s handwriting. The words appear against a backdrop of 15 stars and 15 stripes. Inscription around the outer circumference read “United States of America”, “E Pluribus Unum”, and “Five Dollars”.

Each coin is struck in 90% gold and 10% alloy with a weight of 8.359 grams and diameter of 0.85 inches. The coins are available individually in proof or uncirculated versions, with the proof coin also included in a two coin set with the silver dollar.  The maximum mintage across all product options is 100,000. 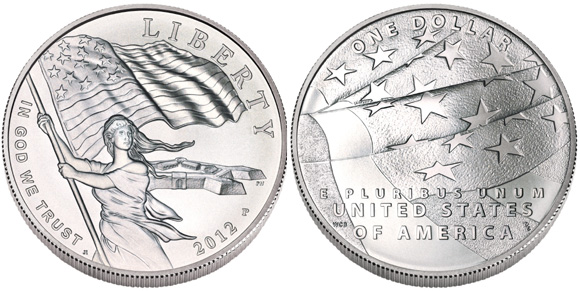 The Star Spangled Banner Silver Dollar carries a design for the theme “The Battle of Baltimore at Fort McHenry.” The obverse features a depiction of Lady Liberty waving the 15-star, 15-stripe Star Spangled Banner flag with Fort McHenry pictured in the background. The inscriptions include “In God We Trust”, “Liberty”, and “2012”. On the reverse is a depiction of a modern American flag waving. The inscriptions include “One Dollar”, “E Pluribus Unum”, and “United States of America.”

Each coin is struck in 90% silver and 10% copper with a weight of 26.73 grams and diameter of 1.5 inches. The coins are available individually in proof or uncirculated versions, with the proof coin also included in a two coin set with the $5 gold coin.  The maximum mintage across all product options is 500,000.

Coins for this program are available at discounted introductory prices until April 5, 2012 at 5:00 PM ET, after which regular pricing goes into effect. The prices effective for the start of sales are $529.30 for proof gold coins, $519.30 for uncirculated gold coins, $49.95 for proof silver dollars, $44.95 for uncirculated silver dollars, and $579.30 for the two coin proof set. The pricing for gold coins will be adjusted as frequently as weekly based on the average market price of gold. Current prices are based on an average gold price within the $1,750 to $1,799.99 range.

Surcharges of $35 per gold coin and $10 per silver dollar are included in prices. These surcharges will be paid to the Maryland War of 1812 Bicentennial Commission to support bicentennial activities, educational outreach activities, and preservation and improvement activities pertaining to the sites and structures related to the War of 1812.

To place orders for the Star Spangled Banner Commemorative coins or for additional information, visit the US Mint’s website http://usmint.gov/