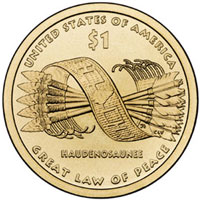 The United States Mint has provided a preliminary release schedule for collector products to be issued during 2010. The schedule is generally updated throughout the year to provide exact release dates and sometimes add new products, but the preliminary version provides collectors with a first glimpse of what to expect.

Many of the upcoming products are related to the ongoing coin series which feature rotating designs. This includes the Native America Dollar, which has its design changed annually, the Presidential Dollar, which issues four designs per year, and the new America the Beautiful Quarter series. This circulating commemorative quarter series issues five different designs per year featuring National Parks or National Sites from each of the 50 states, 5 territories, and District of Columbia, in the order the sites were federally designated.

Other products include the US Mint’s standard annual coin sets. The primary sets are the 2010 Proof Set, 2010 Uncirculated Mint Set, and 2010 Silver Proof Set. Separate sets are issued with only the proof Presidential Dollars or America the Beautiful Quarters.

Precious metals product offerings include the next four releases of the First Spouse Gold Coin series featuring Abigail Fillmore, Jane Pierce, James Buchanan’s Liberty, and Mary Todd Lincoln. These coins contain one half ounce of 24 karat gold. The 2010 Platinum Eagle will be issued as the second release in the six year series of designs focusing on the core concepts of American democracy. The two commemorative coin offerings for American Veterans Disabled for Life and the Boy Scouts of America will feature 90% silver dollar coins.

The full preliminary schedule with the posted availability dates is shown below.