The United States Mint has released three new coin sets targeted as gifts for special occasions. The new products include the 2014 Birth Set, 2014 Happy Birthday Set, and the 2014 Congratulations Set.

The 2014 Birth Set is intended to mark the arrival of a newborn baby in 2014. Each set includes one Lincoln Cent, Jefferson Nickel, Roosevelt Dime, Great Smoky Mountains National Park Quarter, and Kennedy Half Dollar. The coins are struck in proof quality at the San Francisco Mint and carry the “S” mint mark.

The five coins are mounted in a folder containing spaces for a welcome message, the date and time of birth, length and width of the baby, a photograph, and a lock of the baby’s hair. Each set is priced at $19.95.

The 2014 Happy Birthday Set can be given as a birthday gift during the year. Each set includes one Lincoln Cent, Jefferson Nickel, Roosevelt Dime, Everglades National Park Quarter, and Kennedy Half Dollar. The coins are struck to proof quality at the San Francisco Mint and bear the “S” mint mark.

The coins are encapsulated in a decorated folder which includes space for a personalized message to the recipient. Each set is also priced at $19.95. 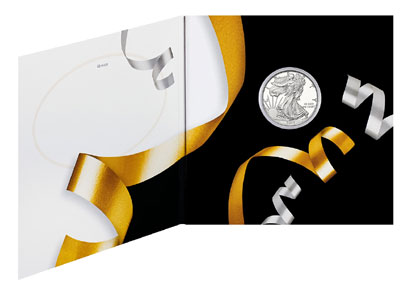 Lastly, the 2014 Congratulations Set can serve as a gift for a variety of events including graduations, weddings, anniversaries, retirements, and milestone birthdays. This product includes one 2014 Proof American Silver Eagle struck at the West Point Mint and carrying the “W” mint mark.

Each set is priced at $54.95, although this may be subject to potential adjustment based on the market price of precious metals.

This represents the first release of the popular annual proof version of the Silver Eagle. The individual proof in standard packaging is scheduled for release on January 23, 2014.