On August 30, the United Sates Mint and National Park Service hosted a launch ceremony for the Vicksburg National Military Park Quarter. The coin represents the ninth release in the ongoing America the Beautiful Quarters Program, which will feature a national park or site located in each of the states, U.S. territories, and District of Columbia. 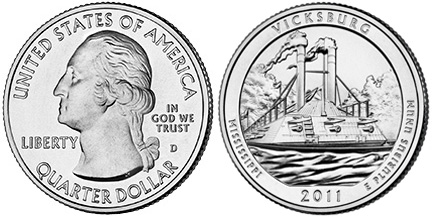 The ceremony for the Vicksburg Quarter was held at the USS Cairo Museum on the grounds of the park. This was a fitting location as the reverse design of the coin features a depiction of the ironclad gunboat on the Yazoo River as it would have appeared while serving in the US Navy during the Civil War.

Following the ceremony, children aged 18 and younger received a free quarter to commemorate the event. Others were allowed to exchange currency for rolls of newly minted Vicksburg Quarters.

The previous day on August 29, the Vicksburg National Military Park Quarter had officially been released into circulation through the Federal Reserve Banks. The United States Mint also began sales of numismatic bags and rolls of the quarters. The 100-coin bags from the Philadelphia or Denver Mint are priced at $49.95, and the two roll sets are priced at $39.95. These will remain available for sale for one year from the release date and can be purchased online at http://catalog.usmint.gov/