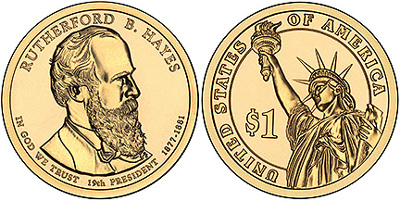 The obverse of the Rutherford B. Hayes Presidential Dollar features a portrait of the former president, along with inscriptions indicating his name, the order of the Presidency, the years of the term, and the motto “In God We Trust”. The reverse of the coin features a rendition of the Statue of Liberty that has been used in common for each issue of the broader series. The reverse inscriptions include “United States of America” and the denomination expressed as “$1”. The date, mint mark, and “E Pluribus Unum” appear on the edge of each coin.

The official launch ceremony was attended by Marc Landry, Acting Associate Director of Manufacturing at the United States Mint, Thomas J. Clbertson, executive director of the Rutherford B. Hayes Presidential Center, and members of the public.

Following the ceremony, children in attendance aged 18 and younger received a free $1 coin to commemorate the event. Other attendees were allowed to exchange currency for rolls of the new $1 coins.

At 12:00 Noon ET, the United States Mint began sales of numismatic rolls of the Rutherford B. Hayes Presidential Dollars. These 25-coin rolls of circulating quality coins are packaged in US Mint branded wrappers which indicate the mint mark, face value of contents, and name of the President. Available from either the Philadelphia or Denver Mint, the rolls are priced at $39.95 plus applicable shipping and handling. Orders may be placed online at http://catalog.usmint.gov/