The United States Mint and the National Park Service held a launch ceremony for the Chickasaw National Recreation Area Quarter on November 16, 2011. This coin represents the tenth release of the America the Beautiful Quarters Program and the final release for the year. 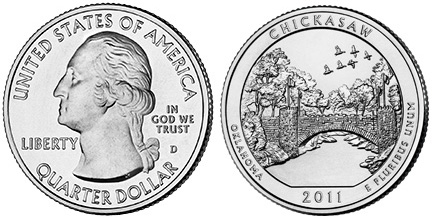 The ceremony was held at Flower Park. Ornamental flower beds within the park were planted a century ago and Lincoln Bridge is at the southern edge of the park. This bridge was built in 1909 for the centennial of President Abraham Lincoln’s birth and is depicted on the reverse design of the quarter.

B. B. Craig, the United States Mint Associate Director of Sales and Marketing, and Bruce Noble, Superintendent of Chickasaw National Recreation Area, were the co-hosts of the event. Oklahoma State Representative Wes Hilliard served as the master of ceremonies.

The launch ceremony was open to the public and followed by a coin exchange where attendees could exchange currency for rolls of Chickasaw Quarters.

The circulation release date for the Chickasaw National Recreation Area Quarters took place two days earlier on November 14, 2011. On the same date, the United States Mint also began sales of numismatic bags and rolls of the quarters. The two roll sets include one 40-coin roll from the Philadelphia Mint and one 40-coin roll from the Denver Mint, priced at $39.95. The bags contain 100 coins from either Philadelphia or Denver and are priced at $49.95. These will remain available for sale for one year from the release date and can be purchased online at http://catalog.usmint.gov/

The America the Beautiful Quarters Program features a national park or site in each state, U.S. territory, and the District of Columbia. The program is scheduled to run from 2010 until 2021, with five different designs release each year with the exception of the final year of the series which will feature one design.