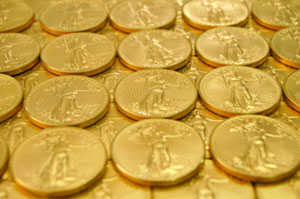 Gold and silver bullion sales at the United States Mint have been on a furious pace during the month of May 2010. With about a week left to go, more than 200,000 ounces of gold and more than 3 million ounces of silver have already been sold to the Mint’s authorized purchaser network.

Authorized purchasers are able to buy bullion coins directly from the United States Mint. They subsequently resell the coins to other coin dealers, bullion dealers, or the public, and facilitate a two-way market for the coins.

For the month to date, the Mint has recorded sales of 142,500 one ounce American Gold Eagles and 61,000 one ounce American Gold Buffalo bullion coins. The combined sales of 203,500 ounces of gold already represents the highest monthly total for gold bullion sales during 2010. The previous high for the year was 117,000 ounces sold during April 2010, when the 2010 Gold Buffalo coins first went on sale.

Last year, there were only two months when the US Mint sold more than 200,000 ounces of gold. Both occasions coincided with the first availability of certain bullion offerings. In October, the US Mint first offered the 2009 Gold Buffalo bullion coins and sold 232,000 ounces of gold. In December, the Mint released fractional weight bullion coins, which helped push total gold bullion sales to 247,500 ounces.

The pace of silver bullion coin sales has also picked up this month, although sales have been strong all year. For the month to date, the Mint has sold 3,040,500 of the one ounce American Silver Eagles. This marks the third time during 2010 that monthly silver bullion sales have exceeded 3 million ounces. In January when the first 2010-dated Silver Eagles were offered, total monthly sales reached 3,592,500. In March, 3,381,000 ounces of silver were sold.

The record for highest monthly Silver Eagle bullion coin sales took place back in December 1986 when 3,696,000 ounces were sold. This was the first full month that the silver bullion coins were available for sale.