The program was authorized under Public Law 111-262 enacted on October 8, 2010. The US Mint will strike and issue a maximum of 100,000 $5 gold coins, 500,000 silver dollars, and 750,000 clad composition half dollars. Surcharges added to the price of each coin will be distributed to CGSC Foundation to help finance its activities in support of the college. 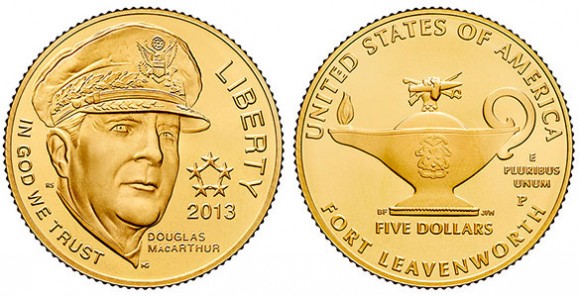 The obverse of the 5 Star Generals $5 Gold Coin features a portrait of General Douglas MacArthur with the 5-star insignia included in the field. Inscriptions include “Liberty”, “In God We Trust”, “Douglas MacArthur”, and “2013”. The reverse features the Leavenworth Lamp, which is the symbol of the Command and General Staff College. Inscriptions read “United States of America”, “E Pluribus Unum”, “Five Dollars”, and “Fort Leavenworth”. 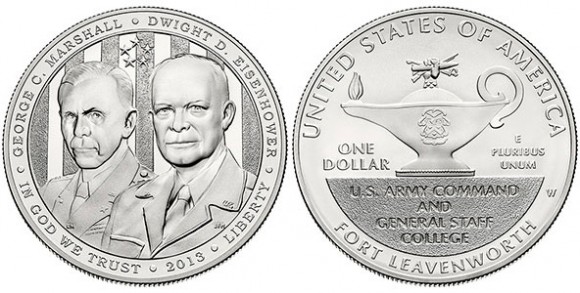 The obverse of the silver dollar features portraits of Generals George C. Marshall and Dwight D. Eisenhower against a striped background with the 5-star insignia above. The inscriptions read “George C. Marshall”, “Dwight D. Eisenhower”, “In God We Trust”, “Liberty”, and “2013”. The reverse features the Leavenworth Lamp with the heraldic crest of Fort Leavenworth on its side. The inscriptions read “United States of America”, “One Dollar”, “E Pluribus Unum”, “U.S. Army Command and General Staff College”, and “Fort Leavenworth”. 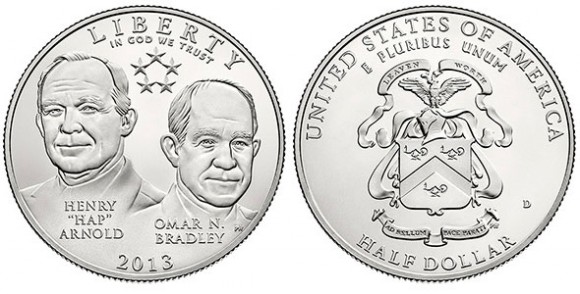 The obverse design of the 5 Star Generals Half Dollar features portraits of Generals Henry Arnold and Omar N. Bradley with the 5-star insignia above. Inscriptions read “Liberty”, “In God We Trust”, “Henry Hap Arnold”, “Omar N. Bradley”, and “2013”. The reverse features the heraldic crest of Fort Leavenworth with inscriptions “United States of America”, “E Pluribus Unum”, and “Half Dollar”.

Both the obverse and reverse were designed and will be engraved by Phebe Hemphill.

In addition to individual versions of each coin in proof and uncirculated formats, the US Mint will also offer a three coin proof set containing one example of each coin struck in proof quality. This set is limited to an issuance of 10,000 units.

The commemorative coins will be available at lower prices during an introductory sales period. After April 19, 2013 at 5:00 PM, regular pricing will go into effect. Products which include the gold coin may vary in price weekly based on the average market price of gold.

Under the authorizing legislation, these coins may only be issued during the one year period beginning on January 1, 2013. Sales for commemorative coins typically close after the maximum authorized mintage has been sold or at a pre-announced date in mid-December.

Orders for these coins may be placed at http://catalog.usmint.gov/