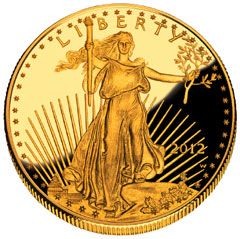 The United States Mint is the world’s largest coin manufacturer, operating six facilities with approximately 1,800 employees. The Mint has operated under the Public Enterprise Fund since 1996, which enables the organization to operate without an appropriation.

The Mint generates revenue through the sale of circulating coins to Federal Reserve Banks, bullion coins to authorized purchasers, and numismatic products to the public. For the latest fiscal year, sharp declines were experienced across all three business lines.

Commenting on the results, Acting Director Richard A. Peterson said, “Our results in FY 2012 reflect a partial return to the norm when compared to the record revenue and net income results of FY 2011 and the dramatic swings we have experienced since FY 2009.”

During the 2012 fiscal year, the results of the circulating coin segment were significantly impacted by the Treasury Department decision to suspend production of the circulating Presidential $1 Coin in December 2011. Previously, the program generated substantial revenue and seigniorage for the Mint. The results of the bullion program were impacted by lower unit volumes for both gold and silver bullion, as well as lower silver prices. The numismatic segment was impacted by a decrease in gold and platinum product revenues and difficult comparisons due to the timing of certain releases in the previous year.

In FY 2012, the United States Mint transferred $77 million to the Treasury General Fund, primarily consisting of amounts earned from the numismatic and bullion segments. Amounts resulting from the sale of circulating coins were retained. According to the Mint, these amounts were required “to mitigate the risks of future potential economic uncertainty, the impacts to our circulating program from continued penny and nickel losses, and the loss of revenue from the suspension of $1 coin production.”

This week Coin Update News will be providing additional detailed coverage of the 2011 financial results for each segment.