The 2009 Louis Braille Commemorative Coin Program was authorized under Public Law 109-247 to commemorate the bicentennial of birth, life, and legacy of Louis Braille, the inventor of the Braille system of reading and writing used by the blind and visually impaired. The program provided an ideal opportunity for the United States Mint to create a special educational product incorporating the coin.

The obverse design of the 2009 Louis Braille Silver Dollar features a front facing portrait designed by Joel Iskowitz. The inscriptions include “Liberty”, “In God We Trust”, “Louis Braille”, and the bicentennial dates “1809” and “2009”. The reverse portrays a young child reading a book in Braille with a bookcase in the background carrying the word “Independence”. The letters “BRL” expressed in Braille code appear in the field above. This represented the first time that readable Braille has appearance on a United States coin.

On March 26, 2009, the US Mint officially launched the coins at the National Federation of the Blind headquarters in Baltimore, Maryland. On the same day, orders were accepted for individual proof and uncirculated versions of the coin. By law, a maximum mintage of 400,000 coins applied across all product options. 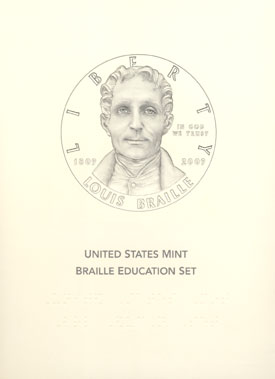 Later in the year beginning on October 8, 2009, the Mint also began accepting orders for the special Braille Education Set. The set contained the uncirculated version of the 2009 Louis Braille Silver Dollar placed within a tri-fold binder containing materials related to the Braille system of reading and writing. 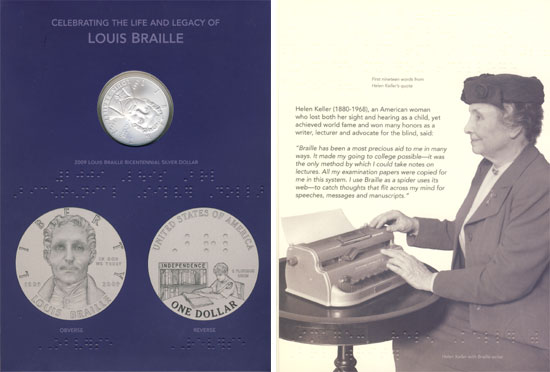 The first panel of the binder includes brief biographical information on Louis Braille and his legacy, along with a sentence written in Braille code. The central panel includes the coin, as well as embossed images of the obverse and reverse design. By making the designs embossed, it is possible to recognize the images and inscriptions by touch. Finally, the third panel includes an image of Helen Keller with a Braille writer and a quote with the first words also written in Braille. Other portions of the folder include a certificate of authenticity and a painted portrait of Louis Braille.

The US Mint offered the Braille Education Set with a production limit of 25,000 units. For the first 30 days of availability, the Mint imposed an ordering limit of just one set per household. The sets were priced at $44.95, which compared to the regular pricing of $33.95 for the individual uncirculated coin which still remained available.

At the official conclusion of sales for all products included in the program on December 11, 2009, the Education Set had received orders for only 10,698 sets out of the 25,000 maximum production limit.