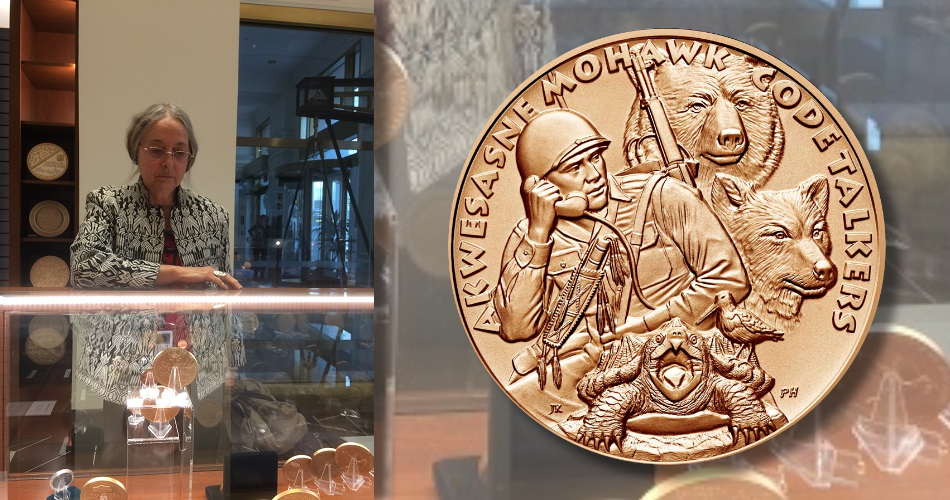 On Tuesday, January 19, 2021, the United States Mint bid farewell to two-term member Jeanne Stevens-Sollman, an environmentalist and full-time studio artist from Centre County, Pennsylvania. Stevens-Sollman was first appointed to the Citizens Coinage Advisory Committee in 2012 and was reappointed for a second four-year term as a representative of the general public in September 2016. She is a past president of the American Medallic Sculpture Association and serves as the U.S. delegate to FIDEM (Federation Internationale de la Medaille).

CCAC Chairman Thomas Uram and U.S. Mint Director David J. Ryder thanked Stevens-Sollman for her service at the start of the public meeting, which was held by videoconference. It’s expected that she will be honored in person in a later meeting at Mint Headquarters in Washington, D.C. 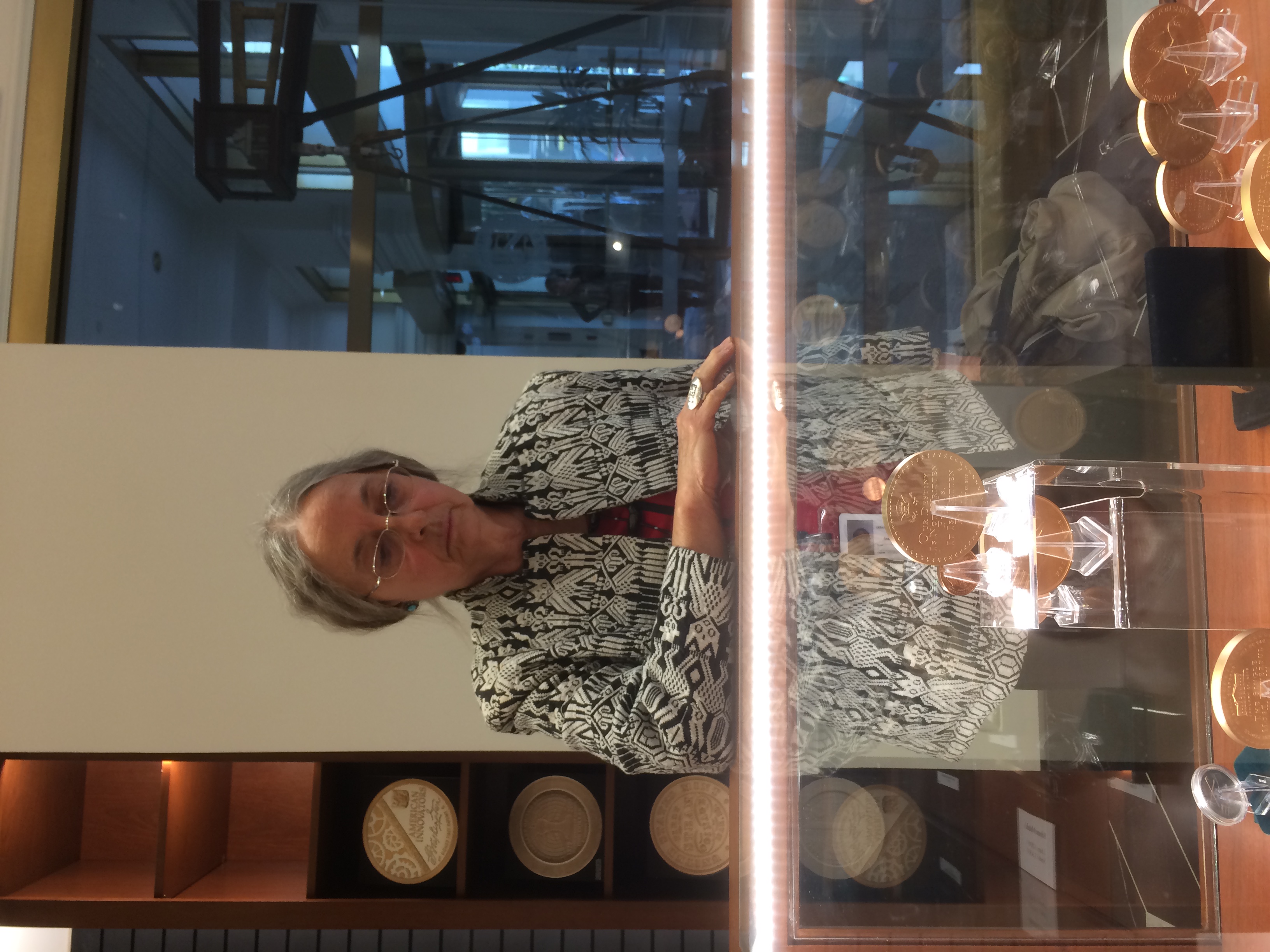 She made these remarks in her farewell:

To quote Merrill Streep, “It is easier to say Hello than Goodbye.” It has been an honor and a privilege to serve as a member of the CCAC, an enriching experience for me to discover the importance of legislature’s role in minting our coins.

It seems like only yesterday I was overwhelmed with my first CCAC meeting—overwhelmed by the wealth and breadth of the numismatic knowledge sitting at the table, and overwhelmed with the charge set before us, the charge being to choose the best designs for our U.S. coins. That was eight-plus years ago. 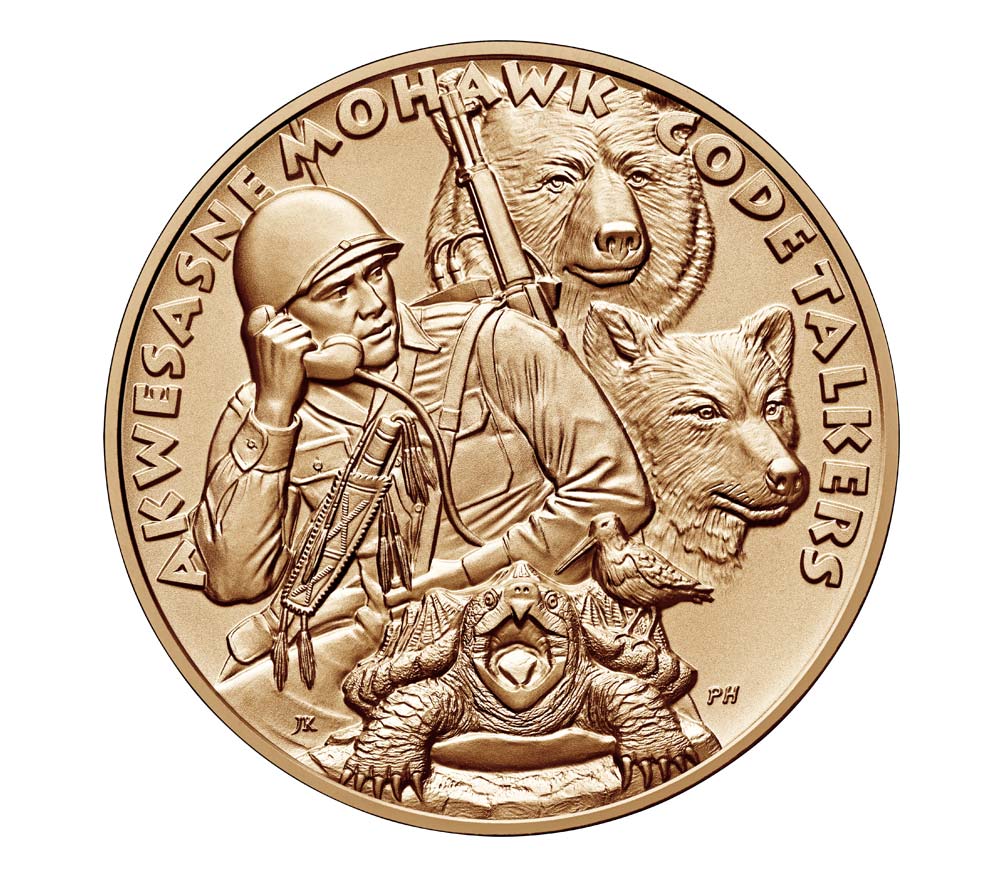 As a member of the Citizens Coinage Advisory Committee, Stevens-Sollman worked on the Congressional Gold Medals awarded to Native American Code Talkers. Shown here: A bronze version of the medal for the St. Regis Mohawk Tribe. (Courtesy of the United States Mint)

During my tenure I had the opportunity to meet several members of the Native American community while we worked on the Code Talkers Congressional Gold Medal Program, to hear their concerns, to appreciate their culture firsthand. And I am grateful for that privilege.

It was the State Quarters Program that lit the fire under me to become a part of this decision-making group. Coins are the Art in our pocket. We pass these to people who mostly never look at them when we make change. It is my purpose to call their attention to the America the Beautiful series, the National Parks series, and of course as we embark on the historic program of Women in American History, I will continue to point out these minted stories. Our coins are a true history of America.

Charles Bukowski, the German-American poet and novelist, said, “An Intellectual says a simple thing in a hard way. An Artist says a hard thing in a simple way.” This is what we try to accomplish as we review portfolios for each assigned program. Find the Best, the Strongest, the Simplest designs to satisfy the legislative challenge, the stakeholder, and of course our numismatic community. Remember that negative space often says more than a planchet bulging with images.

As I leave this illustrious committee, I thank you all for being part of this well-oiled decision-making machine, a machine that blends together ideas that eventually become a small ambassador of American heritage. A bright light in the palm of your hand.

Bukowski says, “Find what you love and let it kill you.” I believe you all have this passion for numismatics and will continue to produce beautiful, dynamic coins.

To my old friends:

Mary (Lannin), congratulations on becoming the next chairperson of the CCAC. I know you will lead them well as you have before—and continue to choose great dining venues.

Donald (Scarinci), I know you will always surprise the group with your interpretation of portfolio designs and will let your opinion be known. Refreshing, to say the least. You have no idea what an important voice you have had for me. You helped me to analyze my own thoughts and present them with alacrity.

Dennis (Tucker), thank you for your continuing ability to grace our meetings with eloquence and sensitive observations. Your sincerity humbles me.

Mike (Moran), I have always appreciated your watchful eye on details of military dress and weaponry, and your keen observation of nature. Continue to press for accuracy. I know you will.

Robin (Salmon), I hope you continue to count all the feathers on all the birds presented in the designs to the committee, to keep a watchful eye on the presentation of nature.

And Tom (Uram), let your calmness and deep knowledge of numismatics be sustained as you continue your term.

To new members and friends: I regret that I cannot speak to all of your attributes or the personal insights you will bring to this committee as there has not been enough time to grow to know you. I wish you great success as you learn how to keep this fine machine well oiled.

To the Mint Staff:

You have been a strong and guiding part of our work as a committee preparing presentations, vetting portfolios, organizing field trips to conferences and mints so that we understand the complicated process in minting our coins. I am forever grateful to you all, especially to April (Stafford) and Betty (Birdsong) who steadied my wobbly legs as I began this fantastic journey, and to Jennifer (Warren) who continues to lead us through the legislative challenges of our work.

My friends, it is never really “goodbye,” but “au revoir”—as we hopefully plan to meet at future coin venues. I will miss you all.

The Citizens Coinage Advisory Committee was established by Congress in 2003 under Public Law 108-15. Its purpose is to advise the Secretary of the Treasury on the themes and designs of all U.S. coins and medals. The CCAC serves as an informed, experienced, and impartial resource for the Treasury Department and represents the interests of American citizens and collectors.

Stevens-Sollman’s position has been filled by longtime coin collector Arthur “Art” Bernstein, who was sworn in by Director Ryder during the same meeting. Bernstein will serve four years on the Committee as a representative of the general public. (Other members serve specific individual roles as specialists in numismatics, American history, sculpture or the medallic arts, and numismatic curation, and four positions are recommended by congressional leadership).