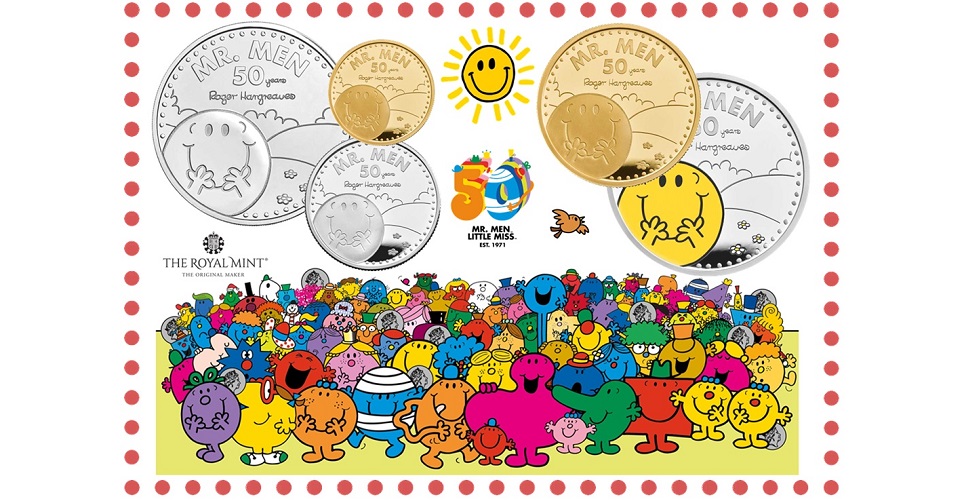 The Royal Mint has released (16th February) the first coin which is part of a three-coin series celebrating the 50th anniversary that started it all and the book that answered a rather curious but profound question from an inquisitive young boy: “What does a tickle look like?”

Created by prolific illustrator Roger Hargreaves in 1971, the Mr. Men and Little Miss books and their ever-growing world of Happyland have become a global favourite amongst many. The first in the series of Mr. Men books went on to sell a million copies within the first three years.

Featured in more than 90 books and starring in films and TV series, their adventures have also been translated into 17 different languages and followed by millions of fans. The Little Miss series’ characters soon joined them, and the exploits of both remain incredibly popular to this day, encouraging children to read and help family generations to bond.

In 1988, the role of Mr. Men and Little Miss illustrator was taken over by Adam Hargreaves, Roger’s son, who was the inquisitive boy who had asked what a tickle looked like. Adam has exclusively provided the reverse designs for all three of the Royal Mint coins celebrating the characters’ 50th anniversary. Featured on the first coin in the series is Mr. Happy, who will be followed shortly in the year by Little Miss Sunshine on the second coin, and Little Miss Giggles with Mr. Strong on the final coin. All coins will include a special 50th-anniversary logo and a facsimile signature of the character’s creator, Roger Hargreaves.

The obverse side of all the coins includes the fifth effigy of HM Queen Elizabeth II created by Engraver Jody Clark and introduced in 2015. The denomination of each option is included in the legend shown on the obverse, as well as the year of issue.

The first coin in the series features Mr. Happy. It is available as gold and silver one-ounce Proof editions, half-ounce silver Proof pieces, as well as a Brilliant Uncirculated edition and a special colour, printed Brilliant Uncirculated edition — exclusively available from the Royal Mint. For additional information about these coins and others available from the Royal Mint, please visit their website.

As part of the 50th-anniversary promotion, the Royal Mint will also be hiding 50 golden Mr. Tickle tickets amongst all three of the colour Brilliant Uncirculated £5 commemorative coins sold individually. Every collector who finds a gold Mr. Tickle ticket will be entitled to a Mr. Men and Little Miss prize bundle.

United Kingdom: Adventurous travelling bear, Paddington, out and about in the city of London once again on new coins