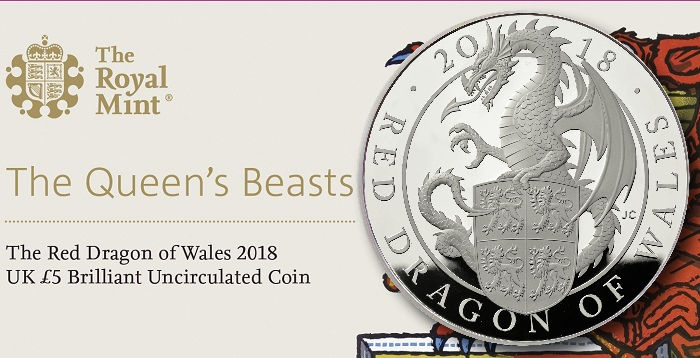 The Royal Mint has launched (4th December) one of the latest coins which is part of the ongoing and popular series entitled “The Queen’s Beasts.” This latest coin is one of ten heraldic Queen’s Beasts that can be seen cropping up through centuries of British Heraldry. Each beast has its own special story to tell and this series explores the Queen’s heraldic guardians and how they represent the Crown and its history.

The third coin in the series is dedicated to the Red Dragon of Wales, which captures the spirit and beauty of the Welsh nation. Dragons are one of the best known mythical beasts, found in legends all over the world, and are associated with strength, wisdom, and power. The Red Dragon was an emblem of Owen Tudor, the grandfather of King Henry VII, who was England’s first King of the Tudor Dynasty, reigning from 1489 until 1509. Henry’s troops carried a fiery red dragon standard at the Battle of Bosworth. More than four centuries later, at Queen Elizabeth II’s coronation in 1953, the dragon took its place as one of the Queen’s Beasts, reinforcing Her Majesty’s connection to Wales.

The dragon is one of the oldest and best known of all mythical beasts, drawn on as often today as in the far distant past. From Western Europe to Asia, it appears in different forms: Lizard-like and fire-breathing in the East, and in the West, upstanding and muscular, its tongue like an arrow, standing for strength, speed, and power beyond human ability — intended to strike terror into its enemies.

The Red Dragon has especially become the emblem of ancient Welsh pride, emerging from heroic traditions of King Arthur and his father, Uther Pendragon. It went on to become a royal beast of the Tudor monarchs, supporting the coat of arms of that proud Welsh dynasty. From there it has become the emblem of the modern Welsh nation, resplendent on the Welsh flag against a background of white and green, the livery colours of the Tudor sovereigns. In this form also, it is Her Majesty the Queen’s Royal Badge for Wales, encircled with a riband bearing the motto: “Y DDRAIG GOCH DDYRY CYCHWYN” (The Red Dragon Gives The Lead). As such, the Red Dragon today retains its significance as a royal beast no less than in centuries past.

The coin’s designs on both sides are created by the same designer, Jody Clark, who is a member of The Royal Mint design team. Jody is best known for the fifth portrait of The Queen that has been seen on U.K. coinage since 2015.

The depiction shows a dragon, its tongue tipped with an arrow point, standing upright and holding the coat of arms which also includes four dragons. The coin is dated, 2018, which can be seen at the top of the design.

The coin is available in a range of finishes, from the Brilliant Uncirculated cupro-nickel pieces to silver and gold Proofs. The largest and heaviest Red Dragon coins are the 100-millimetre wide gold and silver kilo coins. The range starts with the Brilliant Uncirculated collectable £5 coin. The Red Dragon of Wales is the third creature to appear in The Royal Mint’s commemorative Queen’s Beasts range following the launch of The Unicorn of Scotland and The Lion of England. For additional information on these and other coins offered by the Royal Mint, please visit their website.