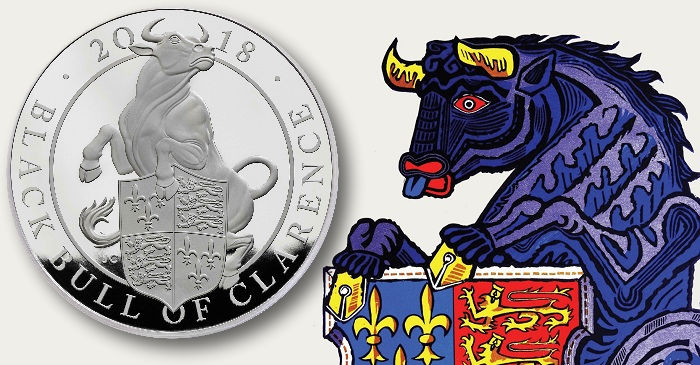 The Royal Mint have released (27th February) the latest coin in their highly successful “Queen’s Beasts” series of coins highlighting the mythical and real animals which are prevalent in British heraldic representation. The newest coin features the Black Bull of Clarence — one of 10 heraldic representations that can be seen cropping up throughout centuries of British heraldry. Each beast has its own special story to tell, and what they stand for.

The bull itself has always been a symbol of power and might, and is associated with the rise of the House of York during the 15th century. It is believed that Edward IV (reigned 1461–1471) and his army bore the bull on their shields in his victorious battle of 1461 after which he became the first Yorkist king of England. The House of York was a cadet branch of the English royal House of Plantagenet. Three of its members became Kings of England in the late 15th century. The Bull of Clarence is believed to have been named for Lionel of Antwerp, 1st Duke of Clarence (1338–1368). While technically the third son, he was the second son to survive infancy of the English King Edward III, of the House of Plantagenet, and Philippa of Hainault. The Duke of Clarence grew to be nearly seven feet in height and had an athletic build with a reputation of fierceness on the battlefield.

The House of York-based its claim to the English throne on this line of descent from Lionel, who was the eldest son of King Edward III to establish a lasting and indisputable bloodline. The claim was in fact derived from Lionel’s only child, Philippa, daughter of his first wife Elizabeth. In 1368 Philippa married Edmund Mortimer, 3rd Earl of March. Their granddaughter and eventual heir, Anne Mortimer, married into the Yorkist branch of the English royal family and was the mother of Richard Plantagenet, 3rd Duke of York, father of the first Yorkist King, Edward IV. Lionel, the Duke of Clarence, is the ancestor of Kings Edward IV, Edward V, Richard III, and all later English and British monarchs beginning with Henry VIII. This was essentially true as well for all later British monarchs except for Henry VII, whose wife, Elizabeth of York, was Lionel’s descendant.

The designs on both sides are the work of Jody Clark, who is a member of the Royal Mint design team. Jody is best known for the fifth effigy of HM The Queen, which was included on all United Kingdom coinage since the portrait was unveiled in 2015. Jody has also spent a great deal of time researching British heraldry to come up with all four of the Queen’s Beasts designs issued thus far.

The reverse side depicts a standing bull protecting the York shield, which represents the English throne. The historical shield is quartered with representations for both the English and French crowns. The text BLACK BULL OF CLARENCE is placed below the primary design along the lower rim while the year of issue is placed above the head of the bull. 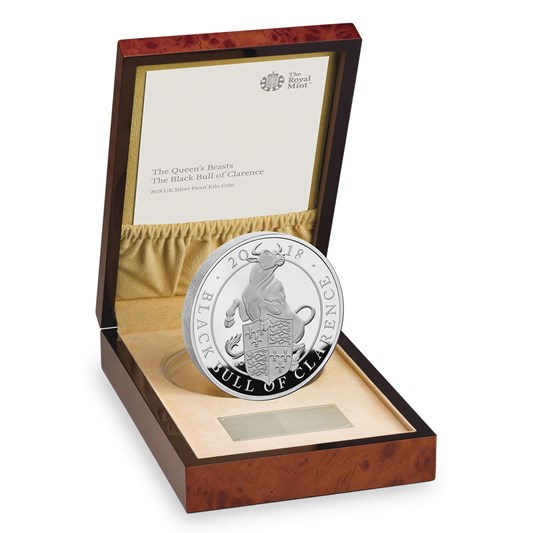 The Black Bull of Clarence is the fourth beast to appear on the Royal Mint’s commemorative “Queen’s Beasts” range following the launch of The Unicorn of Scotland, The Lion of England, and The Red Dragon of Wales. The coins are available in a range of finishes from Brilliant Uncirculated (£5 cupro-nickel strikes) to silver Proof and gold Proof. The largest Black Bull of Clarence coins are the 100-millimeter diameter gold and silver kilo coins, the kilo being the largest coin issued in the United Kingdom. For additional information on these and other coins available from the Royal Mint, please visit their website.