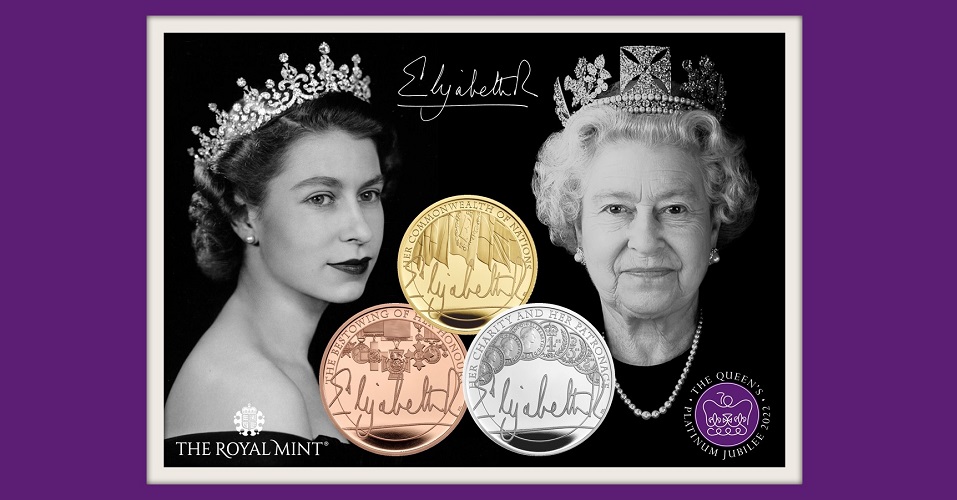 The Royal Mint has released a new special three-coin set which, for the first time ever on British coins of the realm, includes a facsimile of the sovereign’s signature as part of the design. The coins are released in celebration of the Platinum Jubilee anniversary of HM Queen Elizabeth II, who succeeded to the British throne in February 1952.

The reverse side of each of the three coins in the collection has been designed by artist and illustrator P. J. Lynch, who has represented three key areas of Her Majesty’s reign with richly symbolic designs that were inspired by and feature a specific symbol of her personal commitment to others.

THE BESTOWING OF HER HONOURS — Throughout the Queen’s reign, she has bestowed titles and honours to deserving people of her realms and Commonwealth. Many of those persons who have been personally honoured by the Queen have been recognised for their contributions to many different aspects of modern life from the arts, commerce, science, and politics as well as significant contributions to charitable causes. The reverse side of this coin is represented with a depiction of the many medals and honours bestowed by the Queen such as the Victoria Cross Medal for Valour, the George Cross Medal for Gallantry and the MBE — Member of the British Empire Medal

HER CHARITY AND HER PATRONAGE — As Britain’s sovereign, the Queen has been asked and has accepted to become a patron of many charitable causes and organisations during her 70-year-long reign. Queen Elizabeth II is the patron of more than 800 such organisations and continues to offer her support whenever necessary. Since her first year as Queen, she presided over the Maundy Thursday service with the distribution of silver Maundy coins, a tradition which spans back to the reign of King Charles II in 1662. The reverse side of this coin is represented by a set of Maundy coins ranging from fourpence to one penny. They are dated 1953, the first year of her Maundy coins and also includes the first effigy of the Queen as she first appeared on the coins of Great Britain and many Commonwealth countries. This effigy has remained on the Maundy coins of Queen Elizabeth II since they were first introduced.

HER COMMONWEALTH OF NATIONS — Though not strictly the Queen’s Commonwealth per se, she has headed the community of nations, many of which were former colonies since her accession in 1952. Queen Elizabeth II has been in the service of the Commonwealth of Nations since then and has presided over the heads of government meetings, ushering in changes and a forward direction for the 54 nations across all inhabited continents which make up the organisation. The reverse side of this coin is represented with a collection of flags which positions the Commonwealth banner in particular centred along with a flag of the Union Jack second from the right.

Common to each coin in the collection is the Queen’s signature which is placed in the centre and just below each design. The edge of the crown variations includes the incused lettering DEVOTED TO YOUR SERVICE. The obverse of all coins across the range depicts the fifth definitive effigy of the Queen which is the work of Graphic artist and engraver Jody Clark and has been included on all British commemorative and circulation coinage since 2015. The year of issue 2022 and denomination 5 POUNDS (crown coins) or 25 POUNDS is shown as part of the legend surrounding the Queen’s likeness.

The cupro-nickel crown is sealed in a colourful folder containing images and informative text pertaining to the Queen’s 70th anniversary and her long reign. Each of the gold and silver Proof and silver Piedfort coins is encapsulated and presented in a selection of hardwood high-gloss cases and/or matte black cases accompanied by numbered certificates of authenticity. For additional information about this collector series, please visit the Royal Mint’s website.