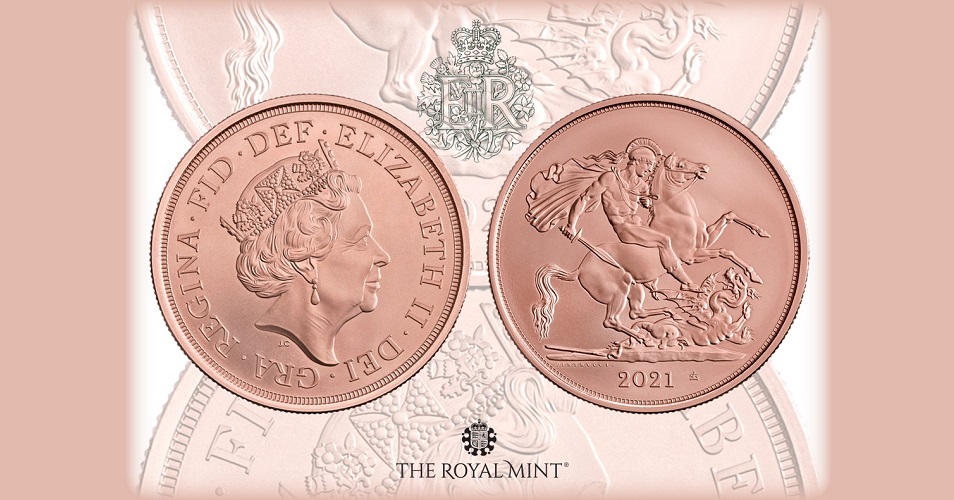 The Royal Mint has released (28th June) the five-Sovereign piece, which is the final coin in its popular 2021 Sovereign Collection marking and celebrating Her Majesty the Queen’s 95th birthday.

This year marks a truly extraordinary and special moment in British royal history — Her Majesty the Queen’s 95th birthday. Born on the 21st April 1926, she was the first child of their Royal Highness’ the Duke and Duchess of York, and, at the time of her birth, she was third in the line of succession to the British Throne. Her Majesty the Queen turns 95 this year. She is the world’s oldest and longest-serving head of state, the longest-reigning monarch in British history, and has overseen an extensive period of extraordinary change.

The new coins are a traditional £5 gold piece often referred to as a five-Sovereign coin and first minted in 1817. Equal in weight to five Sovereigns, the ubiquitous presence of Benedetto Pistrucci’s timeless classic depiction of St. George slaying the dragon on the reverse has ensured the Sovereign was accepted and trusted worldwide. Once known as “the chief coin of the world,” the Sovereign was an instantly recognisable coin and has come to be a favourite amongst coin collectors across the globe.

The largest and rarest of the coins in the 2021 Sovereign Collection, the five-pound gold piece, allows collectors to admire the stunning detail of Pistrucci’s acclaimed and admired design, which has been digitally remastered from the original Pistrucci tooling, ensuring an accurate interpretation of his 200-year-old numismatic masterpiece.

Containing the same weight of gold of five standard Sovereigns, this year these exceptional coins feature a special element in celebration of Her Majesty Queen Elizabeth II’s 95th birthday — a unique privy mark designed as a Royal Crown with the number 95 entwined. The obverse side includes the fifth definitive effigy of HM Queen Elizabeth II created by Jody Clark and introduced onto all British circulation and commemorative coins since 2015.

The £5 Sovereign in Brilliant Uncirculated quality is encapsulated and presented in a polished hardwood case, accompanied by a certificate of authenticity and informative booklet. For additional information, please visit the Royal Mint’s website.