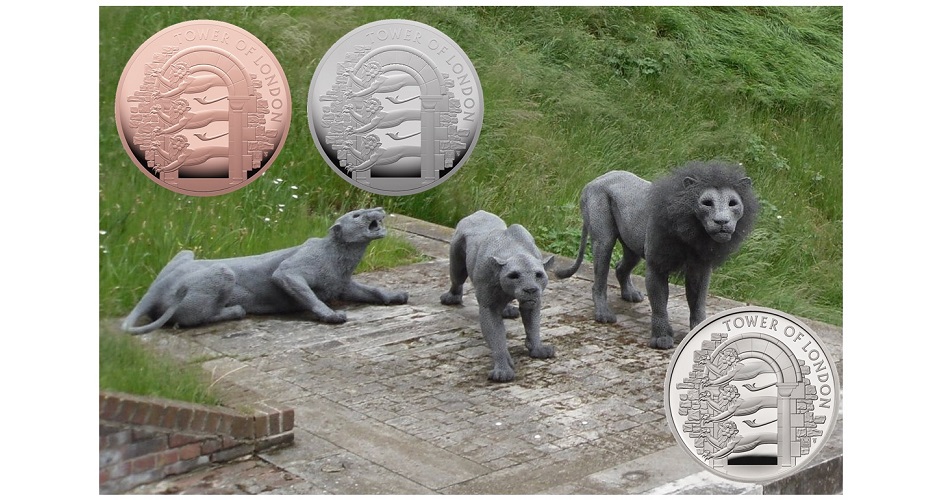 The Royal Mint has launched (17th August) the latest crown coins which introduce the Royal Menagerie and continue the epic story of London’s most imposing royal palace and fortress with the “Tower of London” series. The second coin in the series focuses on the first three lions that founded the Royal Menagerie. It all began when King Henry III, who reigned from 1216 to 1272, was presented with three “leopards” as a wedding present from the Holy Roman Emperor Frederick II. The leopards were actually lions, with the confusion coming from heraldic terminology where lions are called leopards when they’re in a specific stance. Building on his father’s legacy, King Edward I, who reigned from 1272 until 1307, decided to create an impressive new home for the menagerie in which visitors would pass these majestic animals on arrival. Located at the western entrance to the Tower, it became known as the Lion Tower, where visitors were greeted by a heady and intimidating mix of unfamiliar sights, sounds, and smells.

As the Royal Menagerie grew, lions and leopards continued to be the most popular. James I of England and VI of Scotland, who succeeded Queen Elizabeth I on the English throne in 1603, ordered a full refurbishment of the lions’ den to give people a better view of the beasts drinking and washing. Over the course of 600 years, the Tower of London housed exotic animals, including lions, tigers, monkeys, elephants, zebras, alligators, and kangaroos. Treated as precious royal gifts, they were given names and were well fed and cared for. Possibly one of the most magnificent animals to be kept at the Tower was the first appearance of a polar bear in England named Orso, a gift from the King Haakon IV of Norway from 1217 to 1263. The Sheriffs of London were called upon to provide several pounds of fresh meat daily for the nourishment and maintenance of the animals. Orso was even allowed in the Thames to swim and go fishing, when fish were prevalent.

The tradition of monarchs being given a variety of exotic animals, which were housed at the Tower of London, is one of the lesser-known aspects of the Tower’s rich and historical past. This continued until the Lion Tower was ultimately demolished in 1852 after the last of its residents had left. However, its foundations can still be seen as visitors enter the Tower today. However, only sculptures and artificial representations of lions are on display at the Visitor’s Gate. Still, those with a vivid and creative imagination can get a great impression of what it must have been like to be greeted by some of the world’s most beautiful and exotic animals from the four corners of the world.

The gold and silver Proof and base metal Brilliant Uncirculated coins are designed by heraldic artist, Timothy Noad, whose reverse side features three lions in the style of heraldry set against a Norman arched window from the White Tower. The arch element also unifies all four designs in the Tower of London 2020 Collection. The reverse design of each coin also features a special Tower mint mark, which featured for the first time on the first Tower of London series. This depicts the White Tower, demonstrating the link between the Tower of London and The Royal Mint, which operated within the fortress for centuries.

Each Brilliant Uncirculated cupro-nickel crown is presented in a colourful folder which includes images and informative text about the Tower of London, the Royal Menagerie, and its history.

The gold Proof quality coins are presented in polished hardwood cases, accompanied by a certificate of authenticity.

The two additional coins in the series will feature the historic Royal Mint premises and the infamous Tower prison which so many notable persons were held in. For further information about these coins and others available from the Royal Mint, please visit their website.