The Royal Mint have launched (30th January) a new crown coin that marks the 65th year since HM Queen Elizabeth succeeded to the British throne on the 6th February 1952. Her coronation followed the untimely death of her father, King George VI, who had reigned just 17 years. With the observance of this royal event, HM Queen Elizabeth II becomes the first English or British sovereign to ever reach this milestone.

The coin is designed by Royal Mint artist Glyn Davies, whose depiction of the crown of St. Edward takes precedence. The crown is named after Edward the Confessor and has traditionally been used to crown English and British monarchs at their coronation ceremonies. The current version was made for the coronation of Charles II in 1661. To the left of the crown, the commemorative inscription, in seven lines, reads MY WHOLE LIFE, WHETHER IT BE LONG OR SHORT DEVOTED TO YOUR SERVICE. Under the primary design are the commemorative years 1952–2017; the text SAPPHIRE JUBILEE is placed over the design. Representations of two sapphire gems, in the shape of rounded-edge rectangles, are placed on either side of the coin, separating the commemorative text from the date range.

The obverse includes the fifth effigy of HM Queen Elizabeth II, which was designed by Jody Clark and has been in use since 2015. The coin’s face value of 5 POUNDS is included in the Queen’s legend around the effigy.

The precious-metal versions include the edge lettering SHINE THROUGH THE AGES. The Brilliant Uncirculated coin is encased in a colourful presentation blister-pack folder. The silver Proof editions are issued as both traditional crown and piedfort strikes, and are housed in a custom presentation case with certificate of authenticity. The gold piece is housed in a custom-crafted wood case with certificate of authenticity.

For more information on these and other coins offered by the Royal Mint, please visit their website.

The Story of a Remarkable Queen

Princess Elizabeth Alexandra Mary (named after her great-grandmother and grandmother on her father’s side) of York was born on the 21st April 1926 and was the first child of Prince Albert, the Duke of York, and his wife, Elizabeth, the Duchess of York. Princess Elizabeth was the first grandchild of King George V, and at the time of her birth, she was third in the line of succession. As she was not the daughter of the heir apparent, it was unlikely that she would ever accede to the British throne. However, a series of events that occurred when she was just ten years old thrust this young princess front and centre of the monarchy. After the death of her grandfather in January of 1936, her Uncle Edward, Prince of Wales—an immensely popular member of the royal family—succeeded his father as King Edward VIII. Unfortunately for Edward, he was in love with a twice-divorced American woman who was seen as entirely unsuitable to become queen consort of Great Britain. By December 1936, it was clear to King Edward VIII that he could not be both king and married to the woman he loved, so he did the unthinkable: he abdicated in favour of his younger brother, the Duke of York.

Prince Albert took on the regnal name of George VI in honour of his late father, and on the same day that the new reign of King George VI was proclaimed on the balcony of St. James Palace, his young daughter became heiress presumptive to the British Crown. For this reason, 1936 is remembered in British history as the “Year of Three Kings.” 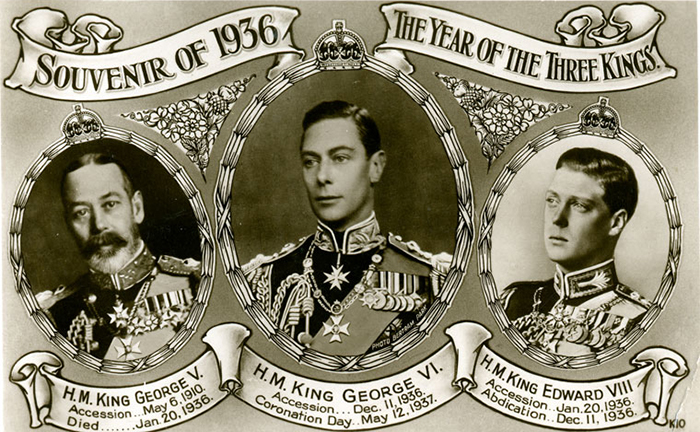 During a multi-nation tour undertaken by the royal family—which included the king, the queen, and both princesses—Princess Elizabeth (who celebrated her 21st birthday on the tour) made an historic radio broadcast to the British nation, as well as to the Empire and the Commonwealth, in which she declared the following:

I declare before you all that my whole life, whether it be long or short, shall be devoted to your service and the service of our great imperial family to which we all belong.

Later, upon her return to the United Kingdom, and in November 1947, the 21-year-old princess married her fiancé, Prince Philip of Greece and Denmark, who was a descendant of Queen Victoria and a grandson of Greece’s King George I. The dashing prince was created the Duke of Edinburgh by his soon-to-be father in law. Within one year of marriage, their first son, Prince Charles Philip Arthur George, was born; and in 1950 their second child, Princess Anne, joined their little family. In 1951, the king, a very heavy smoker underwent a surgery to remove part of a cancerous lung, but his condition was hidden from the public. It was decided that in late January 1952, Princess Elizabeth and her husband, the Duke of Edinburgh, would visit Australia on behalf of her father. On a cold winter morning, King George VI said his farewells to his beloved daughter at the airport. It would be the last time they would see one another. On the 6th February, while on a stopover in Kenya, the 25-year-old Princess Elizabeth learned of her father’s death and that she had succeeded to the British throne. She and Prince Philip made the journey back to the United Kingdom immediately. She was now Queen Regnant. 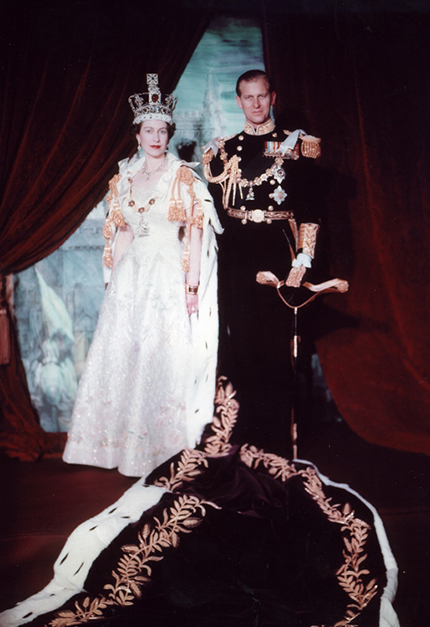 The Queen and Prince Philip after the coronation. The Queen wears the crown of St. Edward, which is depicted on the coin series.

The Queen’s coronation took place on the 2nd June 1953. The centuries-old ceremony was held in Westminster Abbey with almost every crowned head of state and VIP from around the world attending. Since her accession, Queen Elizabeth has presided over almost every Commonwealth Heads of Government meeting and has visited every member country.

In 1960 and again in 1964, the Queen and Duke of Edinburgh added to their family with the births of Prince Andrew and, lastly, Prince Edward, making a total of four children for the couple.

In 1977, the British nation and her other realms celebrated the Queen’s 25th year of accession, or Silver Jubilee, and in 2002, her Golden Jubilee of 50 years on the throne. In 2012, Queen Elizabeth II became only the second British monarch to celebrate a Diamond Jubilee, and she became the longest-reigning monarch in British history on the 9th September 2015, surpassing the record set by her great-great-grandmother, Queen Victoria, who died in January 1901 after a reign of more than 63 years. Yesterday, the 6th February, the Queen observed yet another milestone: that of her 65th year of accession, or her Sapphire Jubilee.