The Royal Mint has unveiled (1st January) the various commemorative coins which will be issued during 2020, and the subjects covered this year are as diverse as has been seen in many years. The subjects include a royal anniversary, a tribute to a well-known author, the 2020 Tokyo Olympics, remembering victory in Europe, and an anniversary with an important American theme.

One of Great Britain’s most notable monarchs, his time on the throne was both tumultuous and eventful. His period of rule saw sweeping change, including the loss of the American colonies in 1776, and also the acquisition of many overseas territories which formed the foundation of Britain’s 19th-century empire. Two centuries after his death, his effigy once again returns to UK coinage for his contribution in making Britain more prosperous and democratic than ever before.

To mark 100 years since Dame Agatha Christie published her first novel, The Mysterious Affair at Styles, the “Queen of Crime” is commemorated on a £2 coin for the first time. Having sold over two billion copies of her stories, she is considered to be one of the most successful authors in the world, and this coin celebrates her legacy of defining the golden age of crime fiction.

One of the most important days in both British and European history, VE Day (Victory in Europe), celebrates its 75th anniversary this year. The 8th May 1945 saw the beginning of the end of the Second World War, the six-year conflict that cost millions of lives and shaped the future of countries and continents. Following news of the Third Reich’s surrender, spontaneous street parties and celebrations across the country lasted long into the night. 75 years later, this £2 coin remembers those unrestrained outpourings of pure joy, leading to the first steps towards a lasting peace which has endured to this day.

2020 welcomes the 400th anniversary celebrating the extraordinary voyage of the Mayflower. The long, dangerous journey that took 102 men, women, and children from Plymouth, England, to Provincetown, Massachusetts, and the founding of one of the first European settlements in the New World. Following their first harvest in 1621, America’s original Thanksgiving feast was held, and the spirit of the pilgrims still remains a part of the annual national celebrations in the United States held every third Thursday in November since 1938. 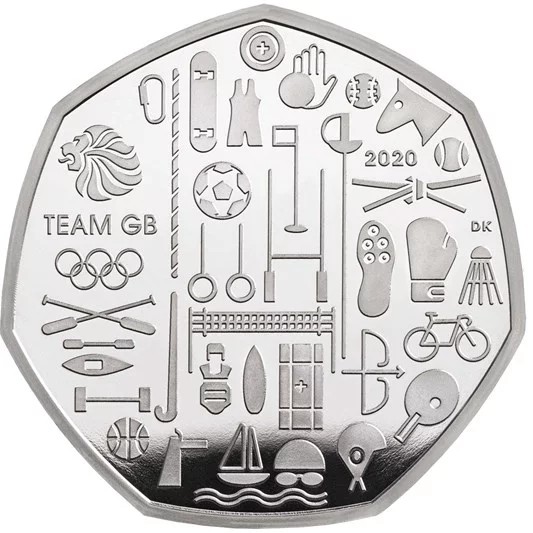 The next Olympiad will be the second time that Tokyo has hosted the Summer Olympic Games, the first being in 1964. After Great Britain’s biggest medal haul in Rio 2016, when 366 members of Team GB’s Olympic team competed to bring home 67 medals, Team GB is commemorated on a unique new 50-pence coin ahead of the Olympic Games in Tokyo. As one of only three countries to have competed in every single summer and winter Olympic Games, Team GB continues to push boundaries and inspire people to achieve their personal best.

The new commemoratives will be available in a variety of qualities during the year, in base metal Brilliant Uncirculated, sterling silver Proof and piedfort options, and 22-carat gold Proof versions. The coins are also available as either a separate item or in sets which include a five-coin option and in a year set which includes all definitive circulation coins from one penny to two pounds.

For additional information on these and other coins, please visit the website of the Royal Mint.