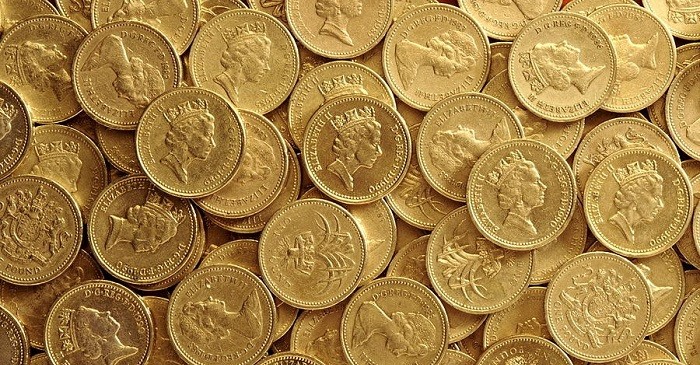 The Royal Mint has announced they estimate that around 145 million (worth U.S. $180 million) old-style one pound coins have not yet been redeemed. The previous coins, initially introduced into circulation in 1983 to replace the banknote of the same denomination, were deemed a great success, when — in just a short amount of time — the coins overtook the use of the banknote and it was soon phased out of circulation.

In 2014, the Royal Mint announced they would produce and circulate a new-generation pound coin to thwart counterfeiters, who, over time, put into circulation as many as £60 million of worthless coins during the 31 years since the coin was introduced. Since their introduction, the Royal Mint decided to use these golden-coloured coins for commemorative reverse designs. In total, there were 25 different designs which represented the four constituent kingdoms within the United Kingdom. Since the coins were introduced in 1983, the first effigy of HM Queen Elizabeth II was that created by Arnold Machin; three additional effigies were used within this period. A 2016-dated one-pound coin with a final design was available only in 2016 in dated Brilliant Uncirculated and Proof sets. Coin collectors have been paying closer attention to the various £1 reverse designs, their collector value, and appeal since their removal from circulation.

The Royal Mint announced the new coins, with state-of-the-art security features such as incused micro-lettering and a hologram, would be produced in a bi-metallic format and take on a 12-sided shape — similar to the previously issued three-pence brass coin used from 1937 until decimalisation in 1971. Much of 2016 was used to produce enough of the new coins to introduce into circulation in time for their debut on the 28th March 2017. The reverse design, which has remained constant since its introduction, features four emblems to represent each of the nations of the United Kingdom: An English rose, a leek for Wales, a Scottish thistle, and a shamrock for Northern Ireland — all emerging from a single stem within a crown.

Before the launch of the new bi-metallic one-pound coins, the Royal Mint estimated there were about 1.7 billion round £1 coins in circulation at the start of the six-month transition period in March 2017. To further aid the public in terms of redeeming the older coins, the Royal Mint and HM Treasury announced the final date for their legal tender status would be the 15th October 2017. Consumers were advised the coins could be redeemed at Post offices and retail commercial banks and that those banks would set out their own rules for redemption.

The question of whether British Overseas Territories, whose currency is based on the pound sterling, would also adopt the new pound coin was finally answered in January this year when HM Treasury announced the same specifications used for the mainland would be extended to those treasuries. It is expected that 12-sided pound coins issued by the treasuries of the Channel Islands of Jersey and Guernsey, the Falkland Islands, the Isle of Man, and Gibraltar will be issued in due course. At the same time, HM Treasury revealed the overall costs to replace the original one-pound coins with the newer, high-tech circulation pound coin. The cost to the British taxpayer reached more than £5,500,000 to collect the more than 1.5 billion pieces which were ultimately melted down to produce the newer coins.

For additional information about these coins and others issued by HM Treasury, please visit the website of the Royal Mint.