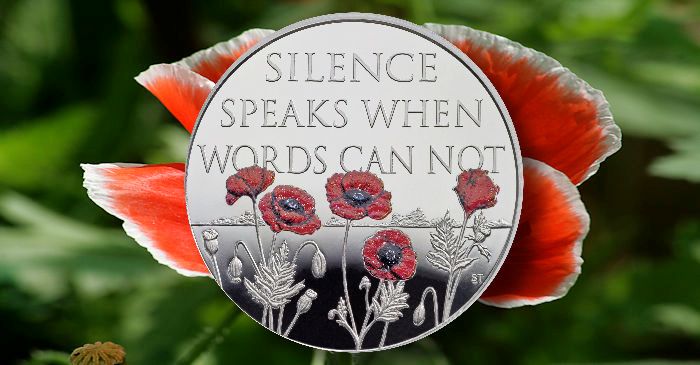 The Royal Mint have released a new crown coin which honours the observance of Remembrance Day, the anniversary of the end of the Great War (later, after 1945, referred to as World War I). As the world reaches the centenary anniversary of the conclusion of this deadly conflict, once referred to as the “war to end all wars” due to the new weapons and strategies utilised on the battlefields, the ceremony known as Remembrance Day takes on a greater degree of solemnity and historical importance.

The war was sparked off by the assassination of the heir to the throne of the empire of Austria-Hungary, the Archduke Franz Ferdinand, while he was on a visit to the capital of Bosnia-Hercegovina in 1914 — then a part of the Empire. The great powers of Europe began to take sides. There was honour at stake, and punishment was going to be faced by those responsible for this treacherous act. Within weeks, sides were formed out of defence treaties and traditional alliances of peoples and regions. Austria-Hungary was allied with the German Empire. Serbia, the traditional protector of the Bosnians, was allied with Russia, while their own traditional Slavic allies and Russia were allied with the United Kingdom and France in a defence treaty created to curtail the ambitions of Germany. Smaller countries such as Belgium were directly in the path of marauding imperial German armies who swept through the territory as a means to attack France — and it is in Belgium where some of the most memorable and deadly battles occurred. By 1917, the United States entered the war on the side of the United Kingdom and France after the imperial Russian forces withdrew from the fighting when their own civil war began in October 1917, seven months after the abdication of Czar Nicholas II — ending more than a century of imperial rule. Toward the end of 1918, it was clear that the forces of imperial Germany and Austria-Hungary were going to lose this conflict to the Allies and, as a consequence, the rulers Kaiser Wilhelm II and Emperor Karl would also lose their thrones. Many newly independent countries emerged after the cessation of hostilities, though Bosnia-Hercegovina, the catalyst which ignited the war, would see a break from the former empire of Austria-Hungary — becoming part of a greater kingdom of the Serbs, Croats, and Slovenes, later known as Yugoslavia. Peace was preserved for only two decades until the outbreak of the Second World War in 1939.

Finally, after more than four years of gruesome fighting, an armistice was agreed to by both sides on the eleventh hour of the eleventh day of the eleventh month — thus ending the Great War. Since this time, the anniversary has been solemnly observed on what has become known as Remembrance Sunday in the United Kingdom and many commonwealth countries who contributed or supported British soldiers with their efforts.

The coin is designed by Stephen Taylor, part of the Royal Mint’s graphic design team, whose reverse side is inspired by the renowned poem “In Flanders Fields.” The poppy is synonymous with remembrance just after the outbreak of the war and the traditions that surround it, making it the main focal point. The inscription, which is in itself integrated as part of the design, reads SILENCE SPEAKS WHEN WORDS CAN NOT and is placed above the bouquet of poppies which are highlighted with a vivid colour application.

The obverse side includes the definitive fifth effigy of HM Queen Elizabeth II as designed by Royal Mint engraver Jody Clark and used on all circulation, collector, and commemorative U.K. coins since 2015.

This coin is produced in three versions: cupro-nickel, sterling silver, and piedfort. A 2.5% donation from every purchase of the Remembrance coin will be made by the Royal Mint to the Imperial War Museums. For more information on this and other coins offered by the Royal Mint, please visit their website.