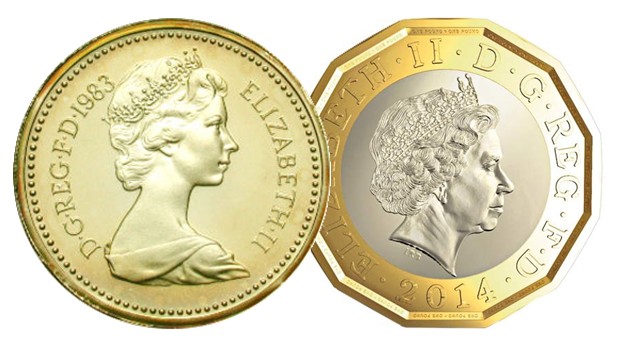 As the United Kingdom prepares to bid a fond farewell to its ever-familiar “round pound” after more than 30 years of use, the Royal Mint has announced (28th December) that they have struck the very last of these circulation-type coins in 2015.

Originally introduced in mid-1983 as a means to replace the one pound bank note, the round pound coin, a gold colored piece with the same diameter as the sovereign coin, was released into general circulation. The coin has a weight of 9.5 grams, a diameter of 22.5 millimeters, and is struck in nickel-brass. 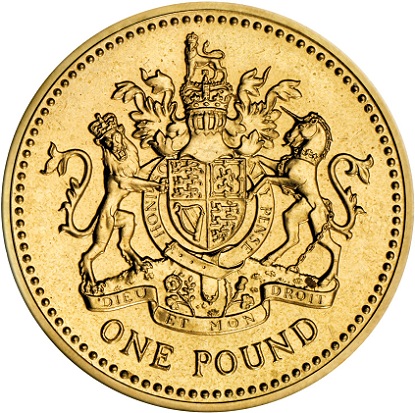 Edge lettering includes the text “DECUS ET TUTAMEN,” a verse that has been used on British coins for centuries, meaning “an ornament and a safeguard.” The included portrait was created by Arnold Machin, with Eric Sewell’s rendition of the Royal coat of arms placed on the reverse. As one-pound bank notes were gradually withdrawn from circulation, these coins became part of everyday life in the United Kingdom.

In preparation for this significant changeover, the Royal Mint eventually produced a staggering 443 million one-pound coins in anticipation of high demand for their use in daily commerce. Today, many of these 1983-dated coins are still in use and can be found in abundance in any handful of change.

From 1984, the design of the ‘round pound’ celebrated the four parts of the United Kingdom, with England, Northern Ireland, Scotland, and Wales each taking a turn to be featured on what would become 24 different circulating designs depicting capital cities, bridges, and national emblems, as well as the Royal Arms of the United Kingdom.

Eventually, over 2.2 billion coins would enter circulation in the next 32 years, but it later became evident that a number of these work-horse coins were in fact counterfeit, and a number of institutions called for the coin to be withdrawn and replaced by a new issue. Estimates from several sources revealed that there could be as many as 32 to 38 million counterfeit coins presently in circulation. 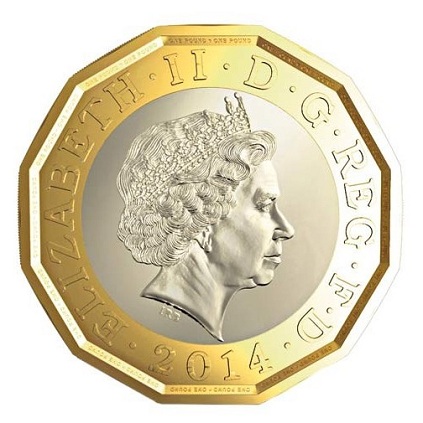 After a lengthy consultation with commercial banks, retail cash-handlers and some sectors of the public, a new coin was unveiled in March of 2014 by the British Treasury. The familiar round coin would be replaced by a bi-metallic, 12-sided coin that included micro-text and other security measures to discourage further counterfeiting. For many who remember the country’s earlier 12-sided brass three-pence coin, first introduced in the United Kingdom during the reign of King George VI in 1937 and withdrawn from circulation after decimalization in 1971, this new issue may seem familiar. 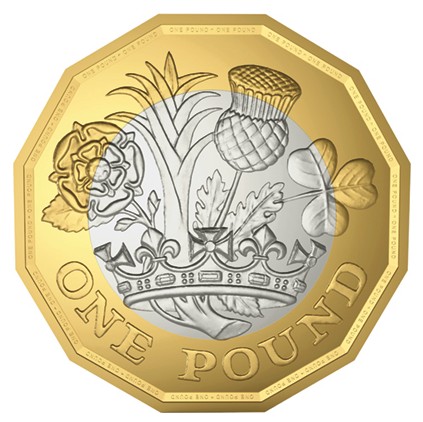 Britain’s final farewell to the round £1 will come towards the end of 2016. This will make way for its replacement in 2017, with the new coin incorporating a reverse design created by then-15-year-old David Pearce, as well as the fifth effigy of HM Queen Elizabeth II, created by Royal Mint engraver Jody Clark.

The last circulation coin to be withdrawn was the older version of the 50 pence piece in 1997, which was replaced by a smaller coin with a reduced weight and diameter. For more information on the new pound coin, as well as on currently circulating coins in the UK, please visit the Royal Mint’s Web site. You can also learn more about the previous 24 reverse designs here.